Catch-22 – Joseph Heller
The book that defined the term and set the standard for bizarre black humour. Still as acerbic and brilliant reading today as it must have been when it first came out. I must have read and re-read this a dozen times and each time I get more out of it. Some of the characters are immortal. Check out Milo Minderbender.
An extract:

Yossarian looked at him soberly and tried another approach. “Is Orr crazy?”
“He sure is,” Doc Daneeka said.
“Can you ground him?”
“I sure can. But first he has to ask me to. That’s part of the rule.”
“Then why doesn’t he ask you to?”
“Because he’s crazy,” Doc Daneeka said. “He has to be crazy to keep flying combat missions after all the close calls he’s had. Sure, I can ground Orr. But first he has to ask me to.”
“That’s all he has to do to be grounded?”
“That’s all. Let him ask me.”
“And then you can ground him?” Yossarian asked.
“No. Then I can’t ground him.”
“You mean there’s a catch?”
“Sure there’s a catch,” Doc Daneeka replied. “Catch-22. Anyone who wants to get out of combat duty isn’t really crazy.”
There was only one catch and that was Catch-22, which specified that a concern for one’s safety in the face of dangers that were real and immediate was the process of a rational mind. Orr was crazy and could be grounded. All he had to do was ask; and as soon as he did, he would no longer be crazy and would have to fly more missions. Orr would be crazy to fly more missions and sane if he didn’t, but if he was sane he had to fly them. If he flew them he was crazy and didn’t have to; but if he didn’t want to he was sane and had to. Yossarian was moved very deeply by the absolute simplicity of this clause of Catch-22 and let out a respectful whistle.
“That’s some catch, that Catch-22,” he observed. 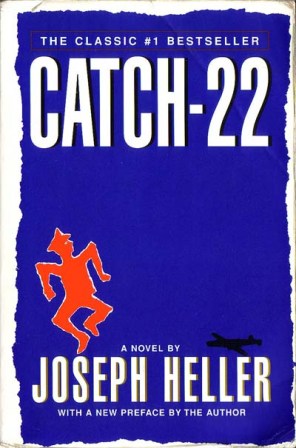