Jonas Coersmeir is a German born architect and designer with a fondness for using a Hitachi electron microscope for inspiration.

His site is HERE.

Below is an example of some SEM images (with scale bar) and the structural motifs that he has extracted for use in design and architectural work. [Image Copyright Studio Jonas Coersmeier]. 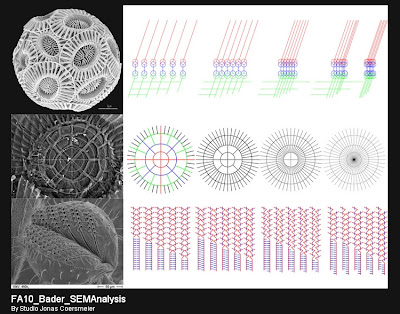 Collage is a distinctively twentieth century art form that explores the boundary between random juxtaposition and conscious arrangement. For example, the Dadaist artist Hans Arp (1887–1966) is supposed to have made ‘chance collages’ by tearing paper into pieces, dropping them onto a larger sheet of paper and then gluing the pieces where they happened to fall.

However,  actual examples of Arp’s work, for example According to the Laws of Chance (1933) show spatial arrangements of torn paper that are more regular than a truly random pattern, thus indicating that he did not full relinquish his artistic control to the laws of chance.

This is shown in the Figure (click to see a larger version). 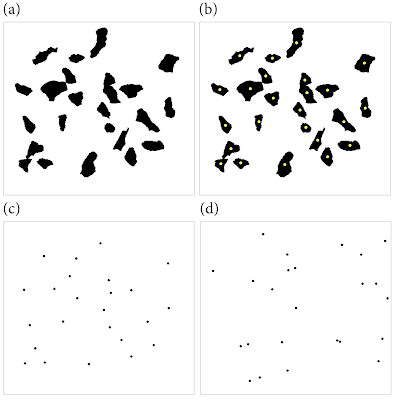 (a) A binarised version of According to the Laws of Chance  by Hans (Jean) Arp made in 1933. This is a collage of painted pieces of paper that have been dropped at random onto a board and glued down. An image of this piece is shown on the Tate website HERE.

(b) A small yellow dot has been placed at the rough centre of gravity of each of the 24 pieces of paper.

(c) Here just the 24 dots are shown in a box the same size as the original piece of art.

(d) A Poisson point process of 24 events within a bounding box the  same size and shape as the original piece of art.

The Poisson point process is a standard way of analytically generating a pattern of a given number of events that show complete spatial randomness (CSR).  The Poisson process has some very interesting properties, here it suffices to be used qualitatively as an example of a pattern that has been randomly generated.  Note that ina Poisson process the points in the pattern can end up arbitrarily close to one another.

The Arp composition is very unlikely to have been generated by the Laws of Chance; the arrangement of the paper centres of gravity are too spread out (or regular) than a completely random pattern.
Posted by Matt at 14:50

Still in print - the combinatorial literature of Raymond Queneau. His book, Cent Mille Milliards de Poèmes, contains 10 to the power 14 poetic variations on a Petrarchian sonnet. 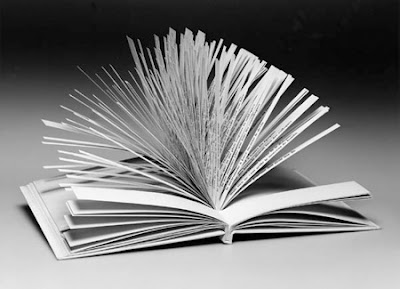 From a New York Magazine piece on 25 Food trucks. 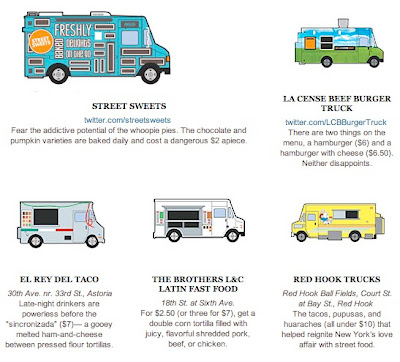 The Anatomy of TEXTure

In the next issue of Glimpse Journal (http://www.glimpsejournal.com/) is a piece I have done on the connections between the elements of text and micro-anatomy -  inspired by a medical man,  William Lawrence FRS;
“…the anatomy of texture, is that which shews the composition of the organs: it is a kind of analysis, reducing these into their constituent elements.”
William Lawrence FRS 1829. On the Nature and Classification of Diseases. Lecture III October 5th 1829. Printed in the London Medical Gazette. 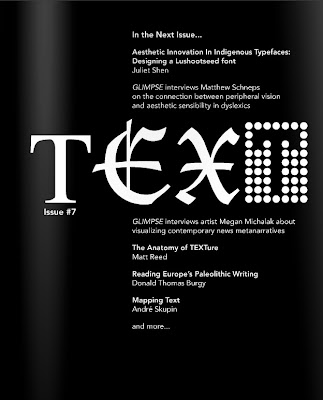