Steven Heller was the
art director of The New
York Times Book
Review from 1978 to
2007. The following
covers are some of the highlights of
those years.

Phillipe Vandenbroeck is a mountaineer and a photographer. His site is HERE. 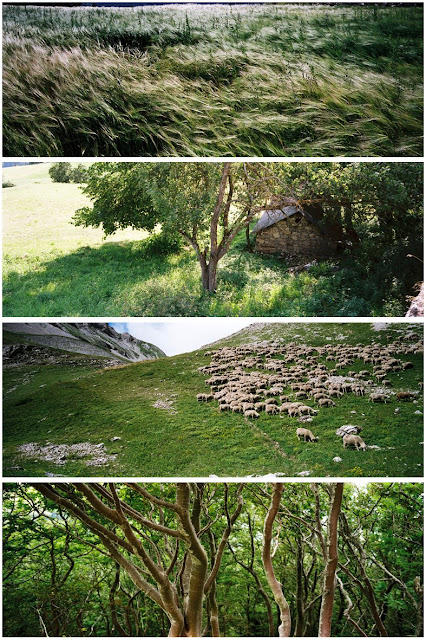 What you see whilst drawing, is what you need for drawing.


This is an interesting eye-tracking study that quantifies how much more you focus on an object when you are drawing it versus just viewing it.


" We ﬁnd that a peculiar feature of the drawing behavior is that the gaze does not move back and forth among diﬀerent objects, but proceeds sequentially, and most ﬁxations on an object are executed within a time interval in which no ﬁxations occur on other objects."

In addition the proportion of inter-object saccades to total saccades (a saccade is a  quick, simultaneous movement of both eyes in the same direction) is four times higher for free viewing (c) versus drawing (d). 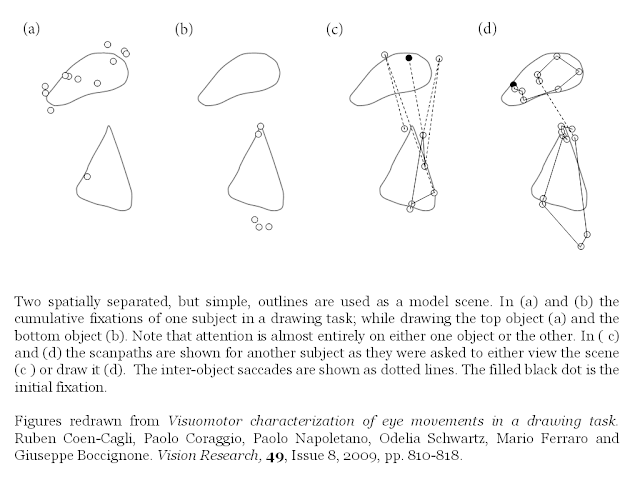 Google Labs have a public data explorer live that allows you to make 'Gapminder' type visualisations of sets of data and the chance to upload your own data sets and interactively visualise them. 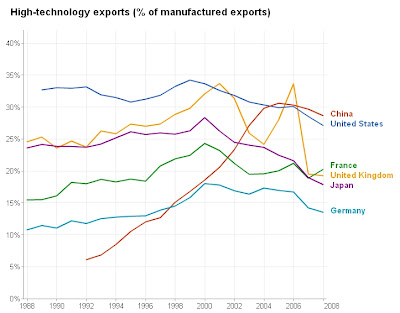 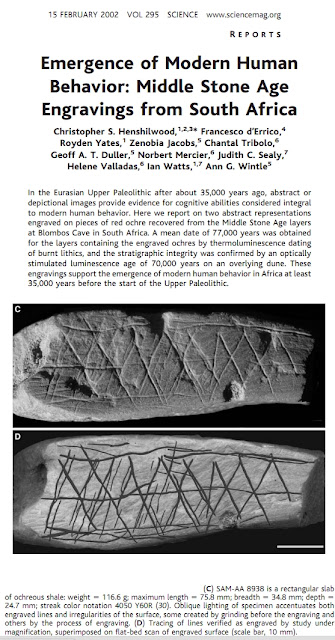 
A Book from the Sky (1987-1991) is the common name of an installation made by the Chinese artist Xu Bing. The installation consisted of hand-printed books and scrolls printed from blocks inscribed with 'false' Chinese characters.

The installation was at the China Art Gallery, Beijing, China.


The installation took Xu Bing over four years to complete, A Book from The Sky is comprised of printed volumes and scrolls containing four thousand 'false' Chinese characters invented by the artist and then painstakingly hand-cut onto wooden printing blocks.


Below is one of the blocks carved by Xu Bing for this project. By definition wood block carving is a study in negative space - it is the space that is NOT removed that delivers the ink (and in this case the whole installation generates a negative space of characters that do not really exist as characters). 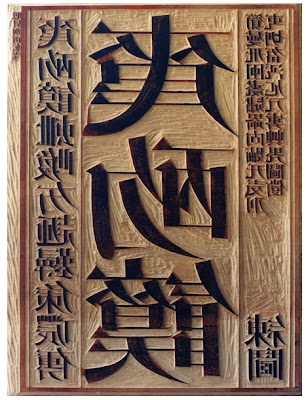 The art of the Noodle

From Wikipedia's piece on Chinese Characters;


The most complex Chinese character still in use may be biáng  below, with 57 strokes, which refers to Biang biang noodles, a type of noodle from China's Shaanxi province. This character along with syllable biang cannot be found in dictionaries. The fact that it represents a syllable that does not exist in any Standard Chinese word means that it could be classified as a dialectal character. 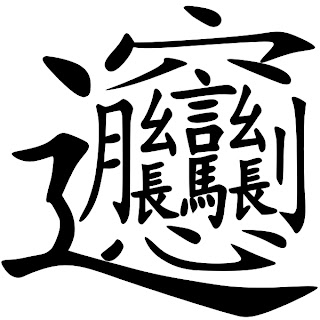 The thumb is the Hero...

As part of my reading around drawing I have wandered off a bit and looked up some stuff on the evolution of the precision grip of the human hand.  The wikipedia entry on THUMB is pretty good and refers to a 1981 book review in the New York Times of John Napiers book Hands (Review HERE).


John Napier was quite a character; he worked with Louis Leakey in Olduvai gorge discovering an early Homind Homo habilis in 1960, he refuted the evidence of Big Foot and he also specialised in hands. Here is a nice paper on the difference between the precision and power grip of the human hand (Napier, John Russell (November 1956). "The prehensile movements of the human hand". J Bone Joint Surg Br 38 (4): 902–913.PMID 13376678.) 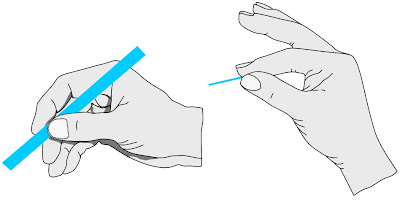 Picasso was a brilliant draughtsman. Here is a delightfully drawn Portrait of a Woman from the MOMA Themes and Variations exhibition of his work. 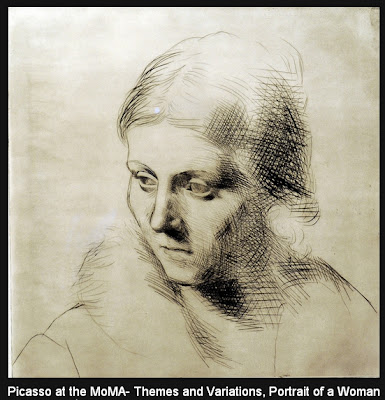 Pablo Picasso was fascinated with bulls, bullfighting, the image of the Minotaur and the cult of Mithras. He also famously produced a set of eleven lithographs of bulls; all between December 1945 and January 1946.


The series is HERE.

The series begins with this image.

And ends with this one. 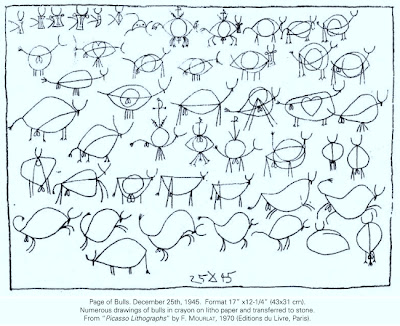 I am a veteran of about 25 years of putting together IKEA furniture.


Even after all this time I am impressed with the great and completely text-free instructions that IKEA has with its flat pack products. I suspect that somewhere in IKEA headquarters in Sweden there is a whole department that specialises in making these instruction manuals.


To the unsung heroes of the IKEA instruction department I salute you.


Below, the iconic and cheap Billy bookcase. 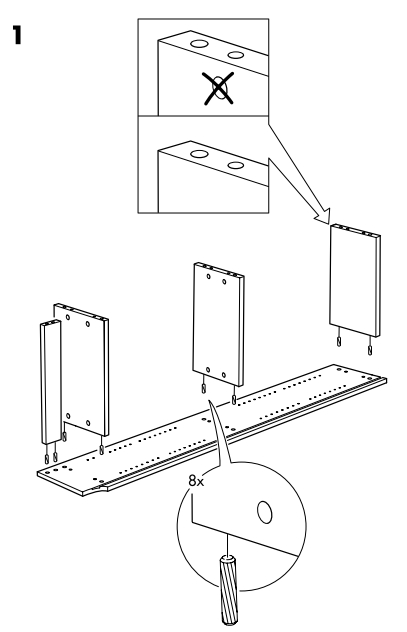 The Myth of the Paperless Office.

Notwithstanding the rise of the Kindle reader or iPad, paper is still great - and this is one of my favourite (paper, ink and card) technical books (Here).

"Over the past thirty years, many people have proclaimed the imminent arrival of the paperless office. Yet even the World Wide Web, which allows almost any computer to read and display another computer's documents, has increased the amount of printing done. The use of e-mail in an organization causes an average 40 percent increase in paper consumption. In The Myth of the Paperless Office, Abigail Sellen and Richard Harper use the study of paper as a way to understand the work that people do and the reasons they do it the way they do. Using the tools of ethnography and cognitive psychology, they look at paper use from the level of the individual up to that of organizational culture.

Central to Sellen and Harper's investigation is the concept of "affordances"—the activities that an object allows, or affords. The physical properties of paper (its being thin, light, porous, opaque, and flexible) afford the human actions of grasping, carrying, folding, writing, and so on. The concept of affordance allows them to compare the affordances of paper with those of existing digital devices. They can then ask what kinds of devices or systems would make new kinds of activities possible or better support current activities. The authors argue that paper will continue to play an important role in office life. Rather than pursue the ideal of the paperless office, we should work toward a future in which paper and electronic document tools work in concert and organizational processes make optimal use of both. 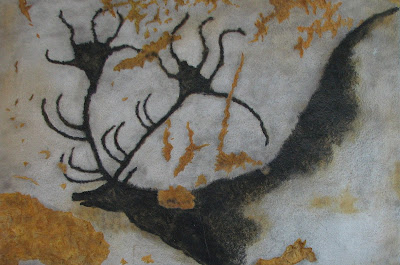 Context Free Art is a free downloadable programme that creates art from a context free grammar.


The site is HERE.

A pattern has an integrity independent of the medium by virtue of which you have received the information that it exists.


Synergetics: Explorations in the Geometry of Thinking. (1975)

Jared Tarbell has a simple algorithm called SUBSTRATE that creates quite lovely images. The algorithm itself is simple:
When iterated, the algorithm produces an output similar to the pattern below. You can make your own HERE. 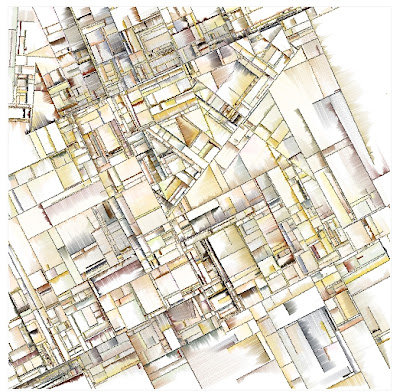 The Mechanism of Life?

Clint Fulkerson does incredible very controlled black and white drawings. Here is an example below called Stuck.
His statement;

I create my artwork through the slow application of decisive marks. As I draw, I follow a loose formula based on what I've already drawn, filling areas of the picture plane gradually, without making initial layout sketches. This makes the final product somewhat unexpected and emergent. It is doodling with restraint. Lines build up into geometric shapes and patterns of varying density and scale to "grow" forms that look organic. Shapes push and pack in organized clusters, accumulating in ways analogous to the growth of cells, tissues, organs, organisms, and communities. I investigate natural phenomena and I attempt to describe my limited understanding of them using a visual mathematical language. 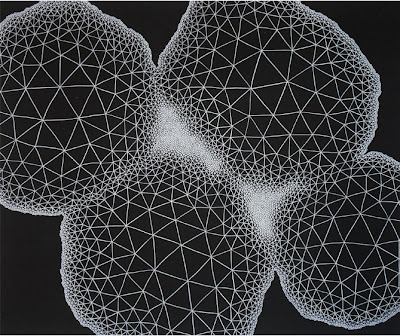 Magnetic resonance imaging (MRI) is an incredible invention and it has revolutionised how clinicians can diagnose serious diseases - because of its ability to create 2D slices through 3D objects and show different soft tissues.


It can also apparently be used to mess about with. For example, a blog HERE by Andy Ellison that shows dozens of animated serial section MRI scans through common or garden vegetables and fruits!


Below a pumpkin section and a 3D visualisation of the internal structure.