Following my previous post  I have been digging into what type of lens Ed Ricketts actually used. Thanks to a kind expert Dr David Riches I have tracked down a couple of pages from the 1929 Bausch & Lomb catalogue - Bausch & Lomb Optical Co, Rochester, NY, “Microscopes and other Scientific Instruments” 1929 which is HERE.
Here is one of the scans showing the range of Coddington magnifiers that where being sold by B&L in the early 1930's.  A similar page shows the Hastings triplets that where available. 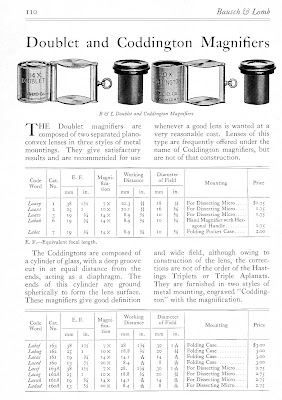 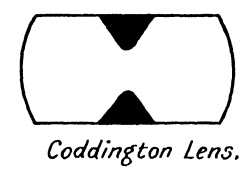 The question is not what you are looking at – but how you look andwhether you see.
Henry David Thoreau. A year in Thoreau's Journal 1851.
Human beings have an incredible ability to both look and see. Each of our eyes is equipped with a high quality lens system composed of two well matched lenses. These lenses are intimately coupled with an adjustable iris and a smooth focusing mechanism that allows us to effortlessly change our focus from close-up objects, less than 10
centimetres away, to objects that are effectively at infinity. The light that is collected by the eye is focused onto the retina, a specialised image forming tissue at the back of the eye ball. The retina is packed with millions of specialised light collection cells; arranged in such a clever way that we simultaneously achieve high and low resolution imaging with colour and monochrome imaging.
The muscles that control where we look constantly and involuntarily shift our eye gaze around, so that we can make the most efficient use of the small, very high resolution, patch on our retina called the fovea. Once a light quanta lands on one of the special photoreceptor cells of the retina it begins a biochemical cascade process and sends a tiny electrical signal down one of the millions of individual nerve fibres that are in the optic nerve. These tiny pieces of data travel back into the specialised visual areas in the brain at a rate similar to that of an Ethernet connection. Once the light generated data has got to the brain specialised arrangements of neurons are used to carry out fast
and sophisticated image computation and analysis.
All of the above is refered to as 'normal visual acuity'. Normal it may be, but simple it is not.
Although the biological processes required for normal vision are quite breathtaking this book will take them for granted and I will not spend too much time explaining normal visual literacy. In this book instead, I really focus on how two specialised and ostensibly different professions; art and science, make habitual use of an analytical form of visual literacy that for shorthand I will repeatedly refer to as Intense Seeing.
Posted by Matt at 20:46

I have been working for a few months in my spare time planning a new book, Intense Seeing, I intend to post bits and pieces here over the next year or so - or as long as it takes to write.
PREFACE
I am a scientist who has worked for decades to both quantify images and communicate the results of my quantification. I have therefore developed deep interests in two disciplines, (1) quantitative scientific imaging and (2) visual analytics. Perhaps I am therefore well prepared to write a book on Intense Seeing.
Over the past 20 years I have been gainfully employed in a number of commercial scientific research organisations as a specialist in measurement science and in parallel I have been lucky enough to work with some key academic specialists in this field. I have a broad interest in the problems thrown up by image capture, processing, analysis and quantification for scientific purposes and a more specific interest in quantitative three-dimensional microscopy for biological studies - Unbiased Stereology.
In addition to my scientific interests in imaging, I have also spent more than 15 years actively trying to understand the complex design issues that are involved in the graphical display of complex high-dimensional datasets. This desire to understand data visualisation has been driven by a very practical need to ensure that the experimental images that I have collected, and the measurement data that I have derived from those images, are presented in the best way possible.
The main stimulus and guide to this study of data visualisation has been the excellent material presented by Edward Tufte in a series of four self-published books; The Visual Display of Quantitative Information 2001, Envisioning Information [1990], Visual Explanations [1997] and Beautiful Evidence [2006].
The penny eventually dropped for me in early 2010. Whilst preparing some lecture notes I casually re-read one of Tufte's books, Beautiful Evidence. I was struck by one phrase; `Science and art have in common intense seeing, the wide-eyed observing that generates empirical information'. The expression Intense Seeing caught my eye. What was Tufte on about? Did he really mean that there was something qualitatively different about the way that scientists and artists looked at the world and that the intensity of seeing gave them the information they needed? I decided to adopt the working hypothesis that in fact Tufte was right; that the way that artists and scientists used their visual skills to generate new `empirical information' really was different and that they had something in common.
This book is all about Intense Seeing. It explores the idea from many angles and with both a modern measurement approach and a historical perspective. It gives some practical aides to help develop your capacity to do more intense seeing. It shows illusions and highlights artefacts. It has previously unpublished science and images. It is written by a professional scientist, who has worked for two decades to quantify images, with a deep interest in the graphic design issues involved in producing scientific graphs, tables, figures, illustrations and evidence.
The book  is a record of my journey to probe this hypothesis and in the process try to understand Intense Seeing. The final piece in the jigsaw puzzle was my experience from 2009-2010 learning about book design and typography to self-publish a re-print of my stereology book. This book will also self designed and typeset so all of the problems with it are my own.
Matt
I show a two page spread below for reference. Although the layout  is based on the LaTeX Tufte class, it uses a different paper stock and the Utopia font designed by Robert Slimbach. 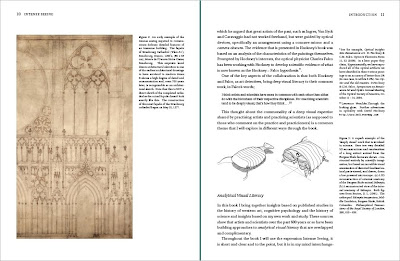 The British magazine the Economist has a major piece on the data deluge this week -  Here
"Everywhere you look, the quantity of information in the world is soaring. According to one estimate, mankind created 150 exabytes (billion gigabytes) of data in 2005. This year, it will create 1,200 exabytes. Merely keeping up with this flood, and storing the bits that might be useful, is difficult enough. Analysing it, to spot patterns and extract useful information, is harder still." 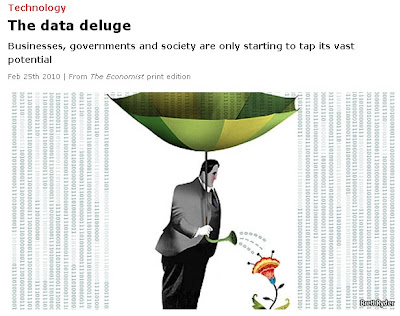