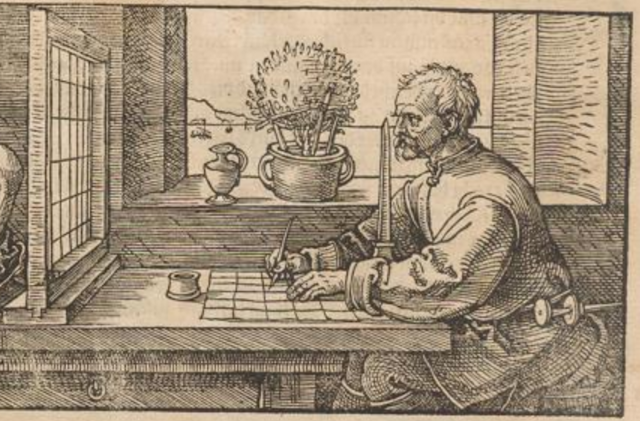 The image is from HERE and below is the full page view - from e-rara in Switzerland. 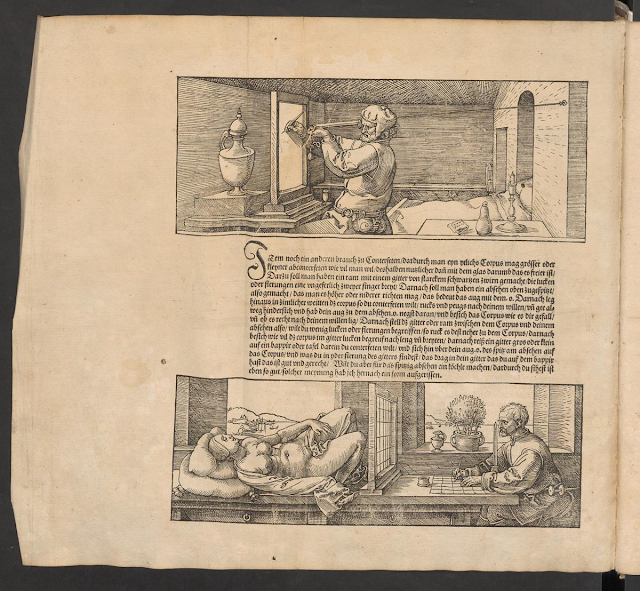 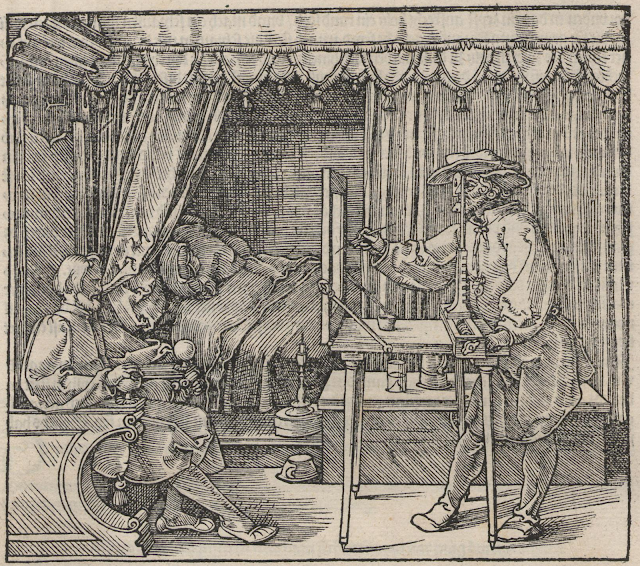 The Art of Limitations

In the early 1980's the English artist David Hockney made a series of very distinctive images using the Polaroid SX-70 instant colour camera. Hockney had hit upon the idea of using the fixed lens of the camera and the white frame of each print to create unique photo montages, or joiners as he called them. Each of the joiners is a single composition that is created from dozens or hundreds of individual Polaroid prints. The separate Polaroid's are stuck together and the frame around each image is left intact. The combination of multiple white frames, when butted up together or overlaid with multiple other Polaroids, creates a grid. This grid is therefore an integral part of the way the joiners are created.

These images have a unique aspect and perspective. (The New York based band Talking Heads created a cover for their second album More songs about buildings and Food in 1978 using a similar approach. It is not clear whether Hockney had co-incidentally arrived at a similar method or had been influenced by the album cover. )

Why did Hockney, a famous painter, choose to create images that are far from painterly?

Perhaps the best of the joiners is a piece called Noya and Bill Brandt with self-portrait, Pembroke Studios, London, 8th May 1982.


How does the grid interact with the scene that Hockney has posed? The grid is completely regular, each Polaroid is laid out so that it butts up to its neighbours, right and left, and it overlaps the Polaroid above it so that there is a completely regular grid of negative space. Within this grid each image is independent.

The overall composition is simple, Bill and Noya are elderly people sitting down together side on to the viewer. They are looking down at a set of black and white “self portrait” Polaroids on the floor, which is made of bare polished floorboards. There is a large canvas in the background of the image.

The image is composed of a square grid made of 7 x 7 = 49 square frames, each of which is a Polaroid image. By definition the images cannot be captured simultaneously so the image captures time - and not necessarily a linear increment of time between pictures.

Hockney has created within this fixed two dimensional grid elements of 3 dimensions, space and time. Some features of note. Bill's head appears in four of the frames all in a square and all indicating his head has moved during the capturing of the composition but it is staring down at the self-portraits over a period of time. Noyas head appears in just two frames and the overwhelming feeling is that she has been staring steadily in the same direction, quietly and in deep thought, over the course of the capture. This may have been true or not - but it is Hockneys selection of the frames that projects this feeling.

Bills hands appear in five frames and they show a real dynamic over the time course of the capture. These hands express what Bill thinks of his self portrait. His hands indicate as we read bottom left upwards and rightwards that he is engrossed then relaxed then held in rapture. Because time is not displayed in a linear sequence we cannot infer dynamics - for example consider the 5 images of Bill's hands (E3, D3, C3, C4, C5).  Depending on cultural preference we can "read" this unordered sequence from bottom left up and right or the opposite or the reality may be that the sequence is not as simple as that.

All we know is that Bills hands had been at some part of the scene capture in these positions, perhaps the bulk of the time Bill's hands were as in E3 and only fleetingly have they been in the other dispositions. These multiple views of Bill's hands, arranged in a dynamic sequence as a subset of the two-dimensional grid, bring enormous life to this scene. This is not a video installation, no pictures are moving. Yet it is not a still life. There is dynamism and movememt in the still image. Hockney has cleverly captured, stretched or compressed and manipulated the time sequence and set of focal lengths into this dynamic image.

It is also worth noting that Bill and Hoya seem to occupy much more of the area than they would do if it had been a single image (25 of the 49 frames are occupied by Bill or Hoya, they are shaed darker grey below).

David Hockney shows that intense seeing, coupled with an image capture technology of limited resolution and flexibility, and a grid, can be used to create a joiner of immense interest. Hockney knew exactly  what he was doing here - he says that these are "pictures that describe how we see - not all at once, but in discrete, separate glimpses... to synthesize a living impression.'

…Hockney began making what he referred to as “Joiners.”… “At first I was just going through all this because the result, the depiction of the particular subject, came out looking clearer and more true to life than a single wide-angle version of the same subject… However, fairly early on I noticed that these joiners also had more presence than ordinary photographs. With five photos, for instance, you were forced to look five times. You couldn’t help but look more carefully.”
“My main argument was that a photograph couldn’t be looked at for a long time. Have you noticed that?” Hockney led me back into the studio and picked up a magazine, thumbing through randomly to an ad, a photograph of a happy family picknicking on a hillside green “See? You can’t look at most photos for more than, say, thirty seconds. It has nothing to do with the subject matter. I first noticed this with erotic photographs, trying to find them lively: you can’t. Life is precisely what they don’t have- or rather, time, lived time. All you can do with most ordinary photographs is stare at them- they stare back, blankly- and presently your concentration begins to fade. They stare you down. I mean, photography is all right if you don’t mind looking at the world form the point of view of a paralysed cyclops- for a split second. But that’s not what it’s like to live in the world, or to convey the experience of living in the world.”

The negative space in this joiner - the white edges to the Polaroids, that have been preserved in the composite are an integral part of this photo montage technique. If all the white edges had been removed the composition would be completely changed. Although each image in the frames are naturalistic - they are untreated Polaroids after all - the overall image is a dynamic image with pace, rhythm and life.
"... the lens on a Polaroid camera is fixed: you can't add close-up or zoom lenses or anything. So that to get a close-up of the floor, I had to get close up to the floor. In this other one here, of Stephen Spender'' (Hockney pulled out a reproduction of a remarkable composite portrait with the writer seated in the foreground and the living-studio receding into the background), I spent so much time in the back of the room, behind Stephen's chair, that finally he exclaimed, ‘Are you still taking my picture, David?' '' HERE

More on the Bill and Noya piece HERE 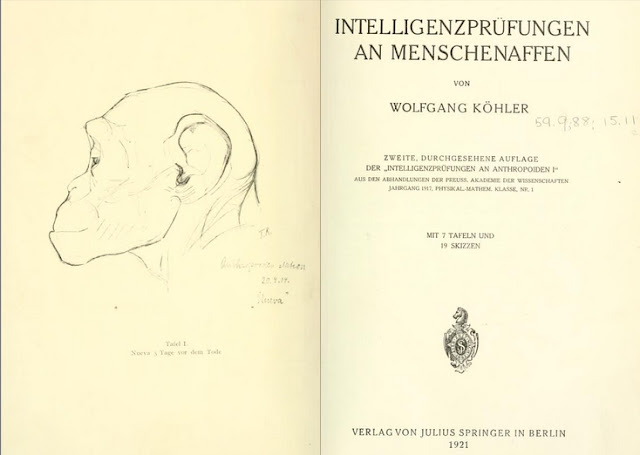 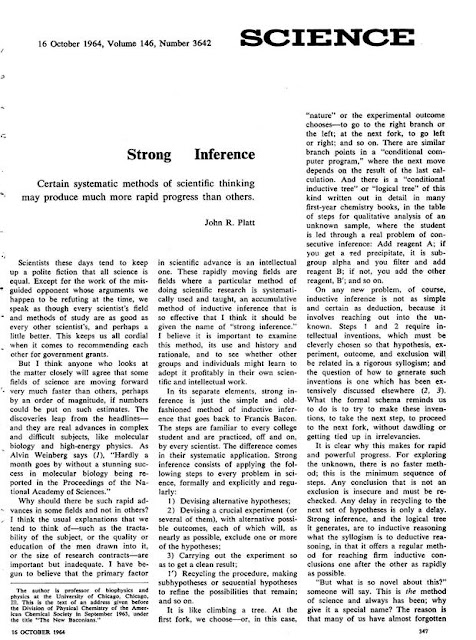 This paper in Science is well worth reading in full (HERE). It describes how the methods of Francis Bacon, when combined with a method described by  the geologist T.C. Chamberlin from 1897, gives what Platt describes as Strong Inference.


One of the key passages from Chamberlin's paper is below. 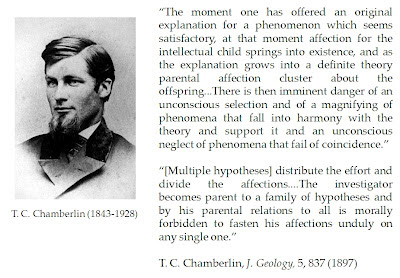 An unofficial but full transciption of the Platt paper is HERE.


There is a Wikipedia page describing strong inference and its modifications HERE.
Posted by Matt at 10:23