The Travels and Essays of Robert Louis Stevenson (1901) 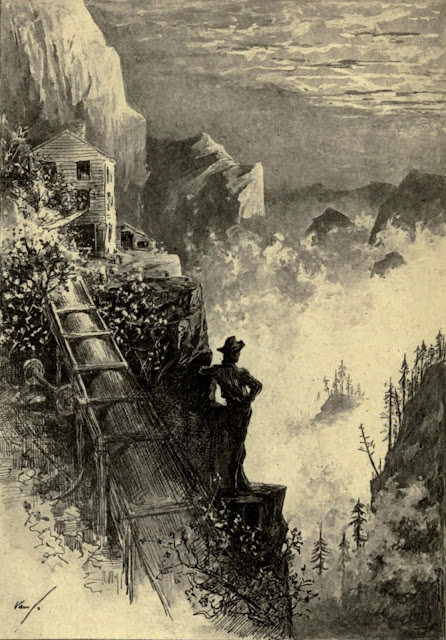 Following the short lived Republic of California, which had been established in 1846, California was admitted to the United States as a free state in 1850. Since 1854 the state capital of California has been Sacramento, but the historic seat of government between 1777 and 1845, covering periods of both Spanish and Mexican rule, was Monterey on the Pacific coast.

In Cannery Row, John Steinbeck's paean to the inhabitants of the sardine canning region of Monterey, he claims that; Monterey is a city with a long and brilliant literary tradition. It remembers with pleasure and some glory that Robert Louis Stevenson lived there.

Robert Louis Stevenson (1850 - 1894) was a Scottish writer of novels, essays, letters, travel memoirs and poetry. He was born into an Edinburgh family that was famous for lighthouse engineering. He was an only child who was frequently ill, but his literary imagination was well developed and his father paid for his first publication to be printed when he was 16. Much of Stevenson's work remains in print and his works have been widely translated. He is best known for his novels Treasure Island, Kidnapped, and The Strange Case of Dr Jekyll and Mr Hyde.

In August 1879 Stevenson began a romantic and adventurous journey to the USA to be united with his married lover Fanny Van de Grift Osbourne. He sailed from Scotland to New York in second-class accommodation aboard the steamship Devonia. The journey, his impressions of his fellow passengers and arrival at New York are recounted in the Amateur Emigrant (1895). From New York, Stevenson then travelled overland by train to California, which is recounted in Across the Plains (1892). The combined effects of the sea and train journeys almost killed him. When he arrived in Monterey he was close to death and only recovered due to attentive care from a local doctor J.P.E. Heintz and his family. After he had recovered, Stevenson then headed for San Francisco where he was eventually nursed back to reasonable health by his lover Fanny.

After marrying in May 1880, Stevenson, Fanny and her son Lloyd, headed north into the Napa Valley area of California. They had an unconventional summer honeymoon in  a three-storey bunkhouse at an abandoned mining camp on Mount Saint Helena. His book The Silverado Squatters (1883) is based on this experience.

Monterey made a big impact on Stevenson. In his essay on Monterey, The Old Pacific Capital, he says; The one common note of all this country is the haunting presence of the ocean. The great faint sound of breakers follows you high up into the inland canons.

In October 1879  Stevenson wrote to his friend William Ernest Henley (who Stevenson later used as a model for Long John Silver), he described Monterey as follows;

This is a lovely place which I am growing to love. The Pacific licks all other oceans out of hand; there is no place but the Pacific Coast to hear eternal roaring surf. When I get to the top of the woods behind Monterey, I can hear the seas breaking all round over ten or twelve miles of coast from near Carmel on my left, out to Point Pinos in front, and away to the right along the sands of Monterey to Castroville and the mouth of the Salinas.

Later in life, after returning to England, Stevenson wrote Treasure Island. From Chapter XIII is this description of the shore of the heavily wooded slopes of the island as seen from the boat Hispaniola;

Perhaps it was this - perhaps it was the look of the island, with its grey, melancholy woods, and wild stone spires, and the surf that we could both see and hear foaming and thundering on the steep beach - at least, although the sun shone bright and hot, and the shore birds were fishing and crying all around us, and you would have thought any one would have been glad to get to land after so long at sea, my heart sank, as the saying is, into my boots; and from that first look onward, I hated the very thought of Treasure Island.

In 1880 Robert Louis Stevenson returned with his family to Britain. After an itinerant period in Europe and the US, he moved to live in the South Pacific in 1888.  After he had moved to Samoa in 1890, he took the name Tusitala, Samoan for teller of tales. He died suddenly at his home in Samoa on 3rd December 1894 at the age of 44.

Image is the frontispiece, drawn by S.W. van Schaick: Far away were hilltops like little islands.