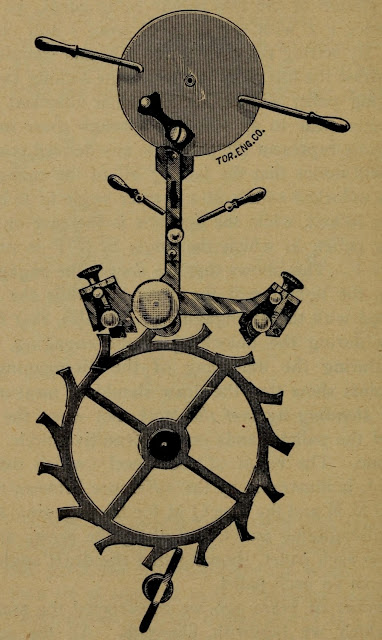 A mechanical wrist-watch is an everyday example of high quality engineering. A typical mechanism has hundreds of tiny parts, many of which are much less than 1/2 millimetre in diameter. The final assembly of these parts into a working watch mechanism requires a steady hand, fine tweezers and a ten-times magnifying eye-piece or loupe.


The energy required to drive a mechanical watch is stored in a spiral torsion spring that is tensioned by winding. As the spring unwinds, it delivers energy to the time-keeping mechanism and display (hour, minutes and second hands) via a balance wheel and escapement. The escapement regulates the release of power from the spring and the repetitive engagement and dis-engagement of tiny components in the escapement produce the distinctive ticking sound of the watch. The great English watchmaker George Daniels (1926-2011) described the escapement as`… the ticking heart of the watch, upon which its final performance depends'.

The English watch and chronometer maker Thomas Mudge (1715-1794) invented the lever escapement in 1754 or 1755, for use in portable clocks. By 1769 Mudge had incorporated his innovation into a pocket watch, which was purchased the following year by George III for his wife Queen Charlotte.  This watch has a fine white enamel dial with ornate, heat blued, hands. It remains in the Royal Collection at Windsor Castle.

Mudge was well aware of how important the lever escapement was, describing his timepiece as, `… the most perfect watch that can be worn in the pocket, that was ever made'. Mudge's confidence was not misplaced; almost every one of the tens of millions of mechanical watches that have ever been made since 1769 have used a variant of his lever escapement. The biggest drawback that this type of escapement has is that it needs to be lubricated to overcome the friction between its moving parts. Over time the lubricating oil in the escapement degrades and thickens and the watch mechanism loses accuracy.

In 1974 George Daniels invented the co-axial escapement to overcome this shortcoming in the traditional lever escapement.

By the late 1960's, tens of millions of mechanical watches with lever escapements were being manufactured every year with a typical accuracy of about ± 20 seconds per day. In 1969 the Japanese watch company Seiko introduced the Astron, the world's first production quartz watch.  Seiko was a long established Japanese watch-maker, having been founded in Tokyo in 1881, with a good reputation as a leading manufacturer of mechanical watches.

The Astron was the result of more than ten years of significant research and development investment seeking to create a high-accuracy battery operated watch. Seiko's quartz watch was revolutionary; it had no main-spring, balance wheel or escapement. Instead, it used a tuning-fork shaped crystal resonator that was driven by a battery and a circuit as the means to keep time. When it was first introduced, the Astron cost as much as a medium-sized car and was 100 times more accurate than a mechanical watch. Within ten years cheap Japanese made quartz watches had transformed the global watch market and almost destroyed the Swiss mechanical watch industry.

This volume was written by Henry Playtner (1865 - 1943), a Canadian watchmaker who established and ran the Canadian Horological Institute in Toronto between 1890 and 1913. Henry Playtner was a hard taskmaster who set very high technical standards in his institute. Each of Playtner's A-1 students had to create a masterpiece watch from raw materials, except the dial, mainspring, hairspring and jewels, in order to graduate from the institute.

Image: The inverted T shaped lever at the centre of the mechanism rocks backwards and forwards as the toothed escape-wheel below it rotates clock-wise. From HERE.

Daniels, G. (2012). All in Good Time: Reflections of a Watchmaker. PW Publishers.