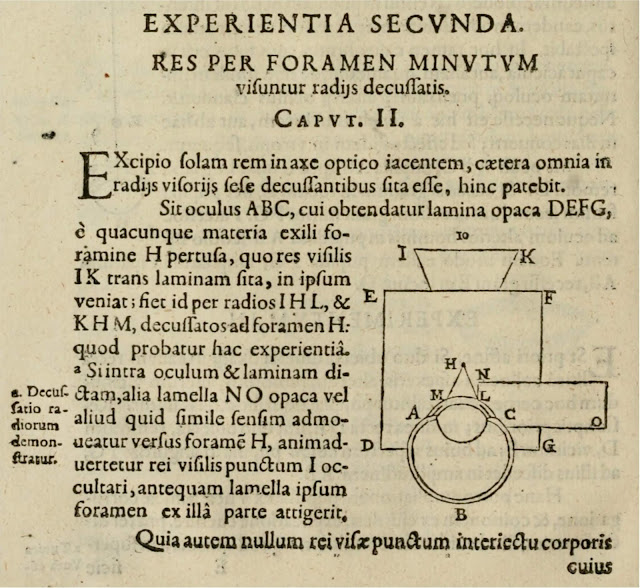 An observation in science is first of all something done, an act performed by the scientist; only thereby is it something seen, a product of the process in which the scientist is engaged … Scientific observation is deliberate search, carried out with care and forethought, as contrasted with the casual and largely passive perceptions of everyday life.

This type of deliberate and careful observation became a distinctive part of the natural sciences during the early modern era of western science (roughly 1490 -1730).

Christoph Scheiner (1573 - 1650) was a Jesuit physician, astronomer and mathematician who was a contemporary of Galileo. He was a first rate scientific observer. Early in his career, Scheiner invented the Pantograph, built his own telescope and drew a map of the moon's surface. He is best known for the brilliant observations of sunspots he made in March 1611.

Scheiner's major work is Rosa Ursina (1630), in which he describes and plots dozens of sunspot observations and criticises some of Galileo's calculations. In common with Galileo, Christoph Scheiner vigorously argued for the primacy  of  observation in natural science.  In Rosa  Ursina, he asserts that: Against  a  single,  true,  observed fact  a  thousand  hair-splitting  arguments  are  without  any  value  at  all.

In 1619 Scheiner published Oculus hoc est: Fundamentum opticum.  This is a thorough investigation of the optical properties of the human eye, including its anatomy, refraction of light by the eye and the role of the retina in vision. Throughout the book, Scheiner describes his observations, experiments and experiences, not a set of theoretical conjectures. Many of Scheiner's investigations include elegant experiments with pinholes, that show how light, optical phenomena and the eye work.

The simplest of all image forming devices is a small, clean, pinhole punched through an opaque sheet of material. Even without a lens of any sort, a pinhole can produce a rudimentary image of a well-lit scene. Although these images are inverted, faint and somewhat blurred, they are recognisably images. The earliest record of a pinhole image is the Mo Ching, a text by the Chinese scholar Mo Ti (also known as Mo Tzu) from about 400 BCE. Since Mo Ti, a small image forming hole has been variously known as a stenopeic disk, pinhole camera, camera ottica or camera obscura.  This knowledge was developed and used by the early medieval Chinese statesman and philosopher Shen Kua (c.1031 - 1095) who described the inverted and reversed image which forms on a wall opposite a small hole in a dark room.

This illustration from Oculus hoc est summarises Scheiner's experimental investigation of what happens to the light rays that have been reflected from an object as they pass through a pinhole. The inferential step made by Scheiner using this experimental apparatus is clear; the observed left-right image inversion seen through a pinhole is not found on the far side of the pinhole, but only on this side, and thus the conclusion is that it has been caused by the pinhole itself. This simple experiment provides evidence of how the pinhole works as an optical element and illustrates that light travels in straight lines: I-H-L and K-H-M.

Two of the practical uses that Scheiner found for pinholes; the Pinhole occluder and the Scheiner disk, are still used by ophthalmologists and optometrists as diagnostic tests.