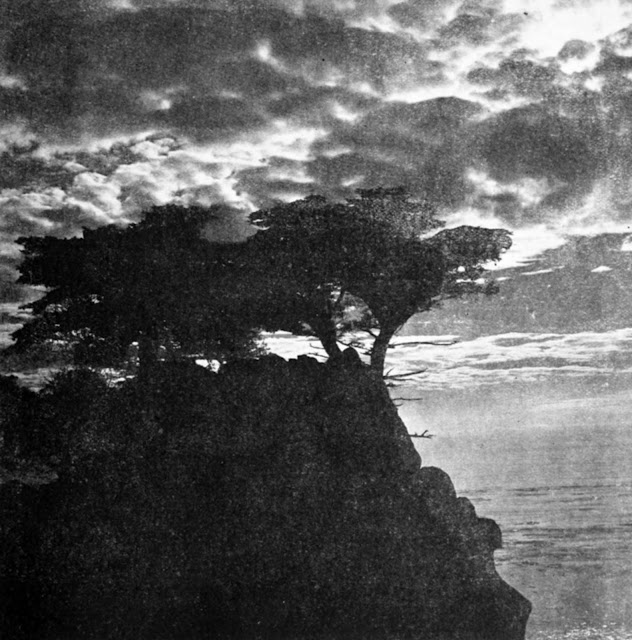 
Within a radius of scarcely five miles together with an inland tension of only a few rods, there stands on Point Lobos and Cypress Point in Monterey County, California, a most interesting group of prehistoric trees widely known as the Monterey Cypress, or, Cedars of Lebanon.

On the Points overlooking the Ocean the constant action of the fierce winds have forced a peculiar growth. Gnarl-trunked, some two to four feet in diameter, their limbs usually twist out from the bowl of the tree into long flat sprays which form table-like tops at the height of fifty feet from the ground.

Other specimens, from the same cause, develop into grotesque shapes, the most spectacular being that of a striding ostrich and long-necked crane, weirdly silhouetted against the sky. Back from the granite shore, partially sheltered from Ocean winds, the trees produce a more open top while long straight branches extend down the less rugged bodies close to the ground. Inland, shut back by advancing Monterey pines and entirely cut off from the ocean winds, the habit of growth is pyramidal.

The tree is a cypress and not a cedar. La Perouse discovered it in 1786, but, not until Hardweg rediscovered it in 1846 did it receive from him its first name, Cupressus Macrocarpa, the Greek for `large fruited cypress'. The flat-topped growth around Cypress Point bears so strong a resemblance to the Cedar of Lebanon (Cedrus Libana) that people non-versed in tree lore have naturally fallen into the error of using the misnomer. Writers, too, overshadowed by the wonderful stories told by the old stage-drivers of the Monterey Peninsula, constantly refer to the Monterey Cypress as the `sacred cedar of the Holy Land'.
More HERE, on the story - that involves five Chinese Buddhist monks in 420AD finding Monterey and somehow bringing this tree with them.