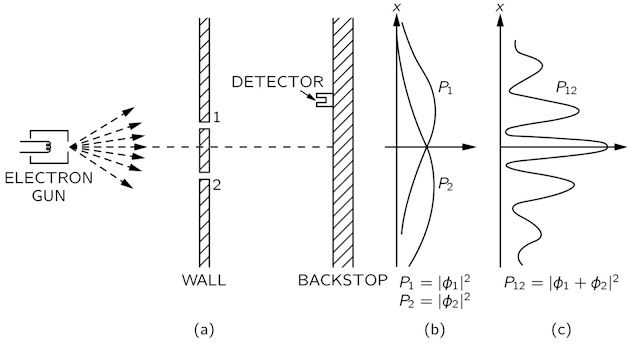 The diagram from 1963 that shows Feynman's original thought experiment on electron diffraction. From  The Feynman Lectures on Physics, Volume III

In this chapter we shall tackle immediately the basic element of the mysterious behavior in its most strange form. We choose to examine a phenomenon which is impossible, absolutely impossible, to explain in any classical way, and which has in it the heart of quantum mechanics. In reality, it contains the only mystery. We cannot make the mystery go away by “explaining” how it works. We will just tell you how it works. In telling you how it works we will have told you about the basic peculiarities of all quantum mechanics.

We should say right away that you should not try to set up this experiment (as you could have done with the two we have already described). This experiment has never been done in just this way. The trouble is that the apparatus would have to be made on an impossibly small scale to show the effects we are interested in. We are doing a “thought experiment,” which we have chosen because it is easy to think about. We know the results that would be obtained because there are many experiments that have been done, in which the scale and the proportions have been chosen to show the effects we shall describe.
From HERE.
Posted by Matt at 20:02