Demonstration of single‐electron buildup of an interference pattern (1989) 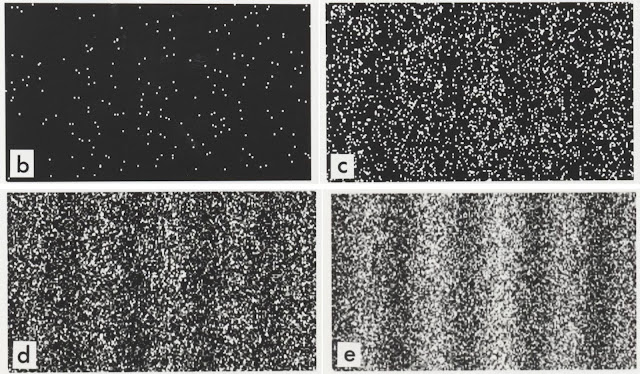 The build up of an electron interference pattern one electron at a time as an electron beam passes through two slits in a barrier is not explainable with classical physics. Richard Feynmann "...absolutely impossible to explain in any classical way, and has in it the heart of quantum mechanics."

Here, from a paper by Tonomura and co-workers from 1989, is a series of experimental images of this phenomena.

The wave–particle duality of electrons was demonstrated in a kind of two-slit interference experiment using an electron microscope equipped with an electron biprism and a position-sensitive electron-counting system. Such an experiment has been regarded as a pure thought experiment that can never be realized. This article reports an experiment that successfully recorded the actual buildup process of the interference pattern with a series of incoming single electrons in the form of a movie.