The British travel writer Robert Macfarlane recently published The Old Ways: A Journey on Foot, a superb book describing his journeys on land and sea over a couple of years. In this book he has a chapter called Ice, that describes his expedition to Minya Konka, one of the highest mountains outside of the Himalayas (7556 Meters high) (a full extract of this chapter is available HERE).

Minya Konka is an incredibly tough mountain to climb - Macfarlane claims that up to 1999 more climbers had died trying to climb the mountain than had reached the summit.

Back in 1930 the famous Swiss geographer Eduard Imhof  traveled to Chinese Tibet to  measure the position and elevation of Minya Konka. He was accompanied by Paul Nabholz and Arnold Heim.

While working there Imhof lived in a Tibetan monastery at the foot of the mountain. He estimated that the elevation of Minya Konka was 7590 metres.

The Eduard Imhof archive has some superb illustrations made by Imhof from this expedition (HERE).

The image below is one of Imhof's sketches of Minya Konka: 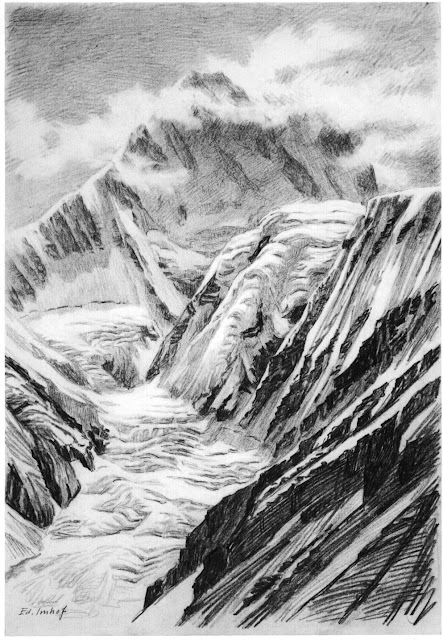