Abbott Thayer is widely refered to as the father of camouflage. His Wikipedia entry (HERE) says the following;

"Abbott Handerson Thayer (August 12, 1849 – May 29, 1921) was an American artist, naturalist and teacher. As a painter of portraits, figures, animals and landscapes, he enjoyed a certain prominence during his lifetime, as indicated by the fact that his paintings are part of the most important U.S. art collections. During the last third of his life, he worked together with his son, Gerald Handerson Thayer, on a major book about protective coloration in nature, titled Concealing-Coloration in the Animal Kingdom: An Exposition of the Laws of Disguise Through Color and Pattern; Being a Summary of Abbott H. Thayer’s Disclosures. First published by Macmillan in 1909, then reissued in 1918, it had an effect on the use of military camouflage during World War I. He also influenced American art by his efforts as a teacher who trained apprentices in his New Hampshire studio."

A copy of Concealing-Coloration in the Animal Kingdom: An Exposition of the Laws of Disguise Through Color and Pattern; Being a Summary of Abbott H. Thayer’s Disclosures is available at the Internet Archive to read or download (HERE).

An image of a Copperhead Snake on its own and hidden in dead leaves from Thayer's book is shown below (painted by A.H. Thayer and Rockwell Kent). 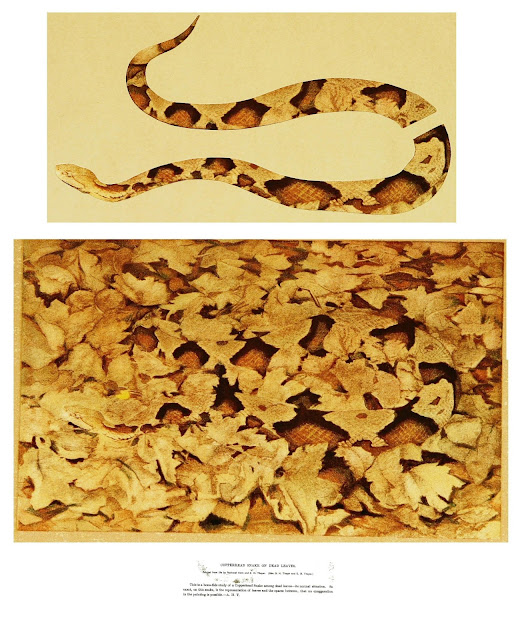 A piece in the Smithsonian magazine puts Thayer's controversial animal colouration ideas into a broader context (HERE). Early in his career the American artist Rockwell Kent worked  for Thayer.