Chasing the Devil out of the Anvil

My Dad began his working life in a workshop in Liverpool. He was originally apprenticed to the blacksmith and his first job was to come into the forge early in the morning and get the paraffin drip fired forge going. In his experience he had found that the blacksmiths tended to be a bit grumpy, probably due to the life time of incessant noisy hammering they had endured.


The workshop specialised in making the iron hoops or tires that went on the outside of  wooden wheels for horse drawn carts, which were still used in the pre-war haulage trade in Liverpool.

One of the things that my Dad told me about when I was 14 or 15 was the important tradition that he had learnt in the forge; every morning the first thing that the blacksmith did was run his small hammer gently along the top face of the anvil with a rhythmic tattoo, this was to chase the devil out of the anvil.  For many years I forgot about this small anecdote connecting me back to the early years of my Dad's work in pre-second world war Liverpool. 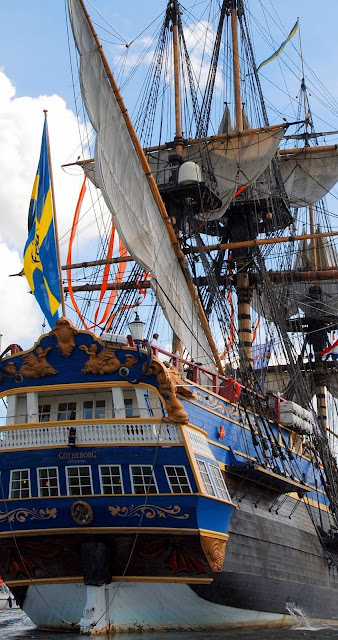 Between 2005 and 2007 I studied in the Department of Technology Management and Economics at Chalmers University of Technology (CHALMERS TEKNISKA HÖGSKOLA) in Gothenberg. Towards the end of the course we were lucky enough to have a VIP tour of the recently built full scale sailing replica of the Götheborg -  an 18th century Swedish East Indiaman that had sank off Gothenburg on 12th September 1745 while approaching its home harbour after returning from her third voyage to China. Although all the sailors survived the sinking of the ship, the vessel itself was lost.

After the tour around the ship we had a special meal cooked for us in the blacksmiths forge near to the boat and this included a demonstration of traditional smithing skills by the blacksmith who had made all of the nails, bolts and fittings for the Götheborg.

Whilst I was making a simple nail with the blacksmith I told him that my Dad had been a blacksmith, I also asked him whether he knew about the tradition of chasing the devil out of the anvil practiced by English blacksmiths.


Not only did the blacksmith know exactly what I was talking about but he and his fellow Swedish blacksmiths had exactly the same ritual and apparently for the same reason as English blacksmiths. During the night evil spirits come into the forge and make themselves at home underneath the anvil. If a hammer has been left on the anvil the devils play havoc and make a noise in the workshop. Because of this superstition the first thing a blacksmith needs to do before working on the anvil in the morning, and to ensure a good days work, is to use his small hammer to chase out the devil.


So almost thirty years after I had first heard this expression, and over a thousand kilometres as the crow flies from Liverpool to Gothenberg, I found out the reason why blacksmiths in Sweden and England (and who knows, probably all over the world) chase the devil out of the anvil.