A diagram is a picture, in which one is intended to perform inference about the thing pictured...

HERE is a very nice paper,  about the Mathematical Revolution that immediately preceded the Scientific Revolution. It is by the Australian philosopher James Franklin, who writes about the history and philosophy of science, inference and probability (among other things).

In this paper Franklin digs into the development of the diagram as a discrete type of image or picture: His definition of a diagram is "a picture, in which one is intended to perform inference about the thing pictured", which is pretty good.

The first successes of the Scientific Revolution were exclusively geometrical, if geometry is taken in a wide sense.
They were possible because Europe had had several centuries of training with reasoning with diagrams — not only the Euclidean ones labelled "geometry", but anything from simple family trees to complicated perspective constructions to gridded maps. The Scientific Revolution could exist because it inherited a medieval Mathematical (mostly Geometrical) Revolution. The evidence includes not only the surviving pictures themselves, but descriptions of what those pictures produced in the astonishingly vivid medieval visual imagination. The imagination was regarded as literally full of pictures, and so a medium for scientific visualisation. It was the medium Galileo used successfully for his thought experiments.
The article begins:

Tartaglia’s Italian Euclid of 1543 is geometry in the narrow sense. But the big two books of 1543, Copernicus’ De Revolutionibus and Vesalius’ De humani corporis fabrica are also geometry, if a slightly wider sense of the term is allowed. Though Copernicus writes on physics, he does not speak of forces, energies, masses or the like: there are only the appearances of the heavens from certain points of view. Though Vesalius is biology, there is no physiology, or mechanical analogy, or discussion of causes: there is only how parts of the body look from suitable points of view. But the three books share more than just pictures, and it is this extra element that is the focus of this article. Euclid’s Elements is not a picture book of shapes. The point of Euclid is to reason about the diagrams, and expose the necessary interrelations of the spatial parts. So it is with Copernicus and Vesalius. 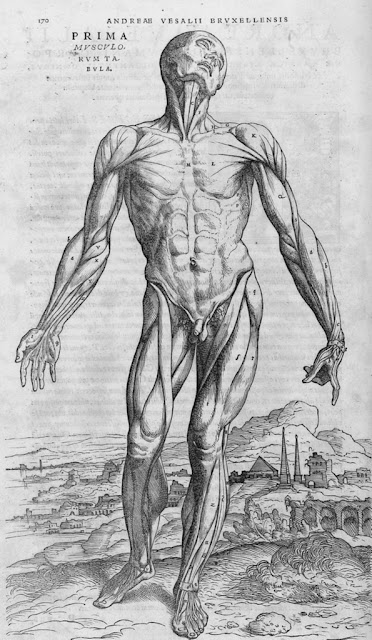