The great Liverpool shell find of 1855

Liverpool has been a crossroads for international trade for hundreds of years. But one of the strangest true stories I have found that illustrates this is the story of Philip Pearsall Carpenter's discovery of millions of sea-shells that had originally been collected in a remote region of the Sea of Cortez in Mexico and shipped back to Liverpool.

The story begins with the Belgian naturalist Frederick Reigen who lived in the Mazatlán region of Mexico (close to the Sea of Cortez) between 1848 and 1850. Reigen started collecting sea shells and ended up amassing tons of shells - probably one of the biggest collections ever made. Somehow the bulk of this vast collection was sent to Liverpool in 1851 for sale. There the shells were spotted by a British minster and eccentric Philip Pearsall Carpenter; 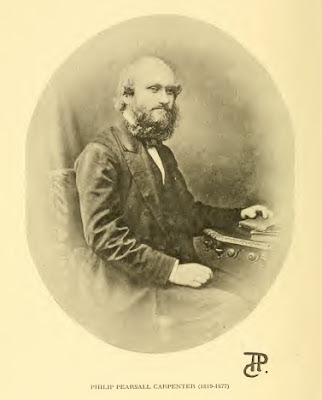 He had been  instructed  in  natural  science  when  a  boy, had made a collection of shells, and had always had a taste for natural history. One day, in 1855, while  walking  down  a  street  in  Liverpool,  Carpenter  caught  sight  of  some  strange  shells  in  a dealer’s window.  He went in, and found that the specimens were part of a vast collection made by a Belgian naturalist named Reigen at Mazatlan in California.  The collector had died, leaving his shells unsorted and unnamed.  Carpenter bought them for 50l.  There were fourteen tons of shells, each ton occupying forty cubic feet.  The examination, description, naming, and  classification of these shells was the chief work of the rest of Carpenter’s life.  By the comparison of hundreds of examples, 104 previous species were shown to be mere varieties, while 222 new species were added to the catalogue of the mollusca. Thenceforward, though  he  sometimes  preached,  made  speeches, and wrote pamphlets,  most of Carpenter’s time was given to shells,  and even when he received calls or paid visits he would wash and pack up shells during conversation. Their pecuniary value when named and arranged in series was great, but he never tried to grow rich by them, and his whole endeavour was to spread the knowledge of them and to supply as many public institutions as possible with complete collections of Mazatlan mollusca.  A full report on them occupies 209 pages of the ‘British Association Reports’ for 1856, and further  details  are  to  be  found  in  the  same  reports for 1863, and in the ‘Smithsonian Reports’ for 1860.

Carpenters collection was catalogued by Katherine van Winkle Palmer in 1958 - the book is HERE and below is a plate from it. 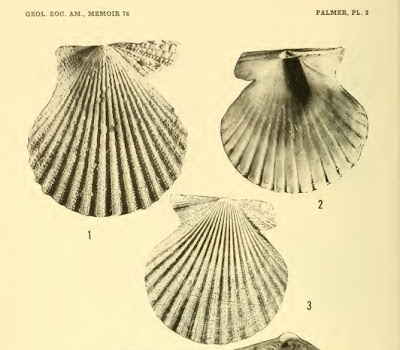