The following image is taken from an article that Harry Whittington wrote in 1960, Unique Fossils from Virginia, for the magazine Virginia Minerals (Here). The article describes trilobite fossils that were incredibly well preserved. As the Obituary for Harry Whittington in the Guardian (July 8th 2010 ) explains;
"Trilobites had hard carapaces made of the mineral calcite, which meant that extraction of the fossil from the rocky matrix could take many hours. But in the late 1940s, Harry and his colleague Bill Evitt discovered a locality in Virginia (in rocks 460m years old) where the "shells" of the trilobite had been replaced by insoluble silica. By throwing samples into acid, they could recover perfect trilobites by the thousand, without hours of digging. They were perfect replicas, effectively made of glass."
These fossils are three-dimensional - the acid used in their preparation dissolves the surrounding rocks and leaves exquisite, microscopic, details of the 460 million year old animal.

I also realised that they were a good example of dequantification in scientific images. The text indicates the magnification (x4 etc) - but this is ambiguous - are these the magnifications inscribed on the objective lens of the microscope or are they actual magnifications i.e. that the image at final printed size shows a 4x linear magnification of the physical object? I guess we will never know. 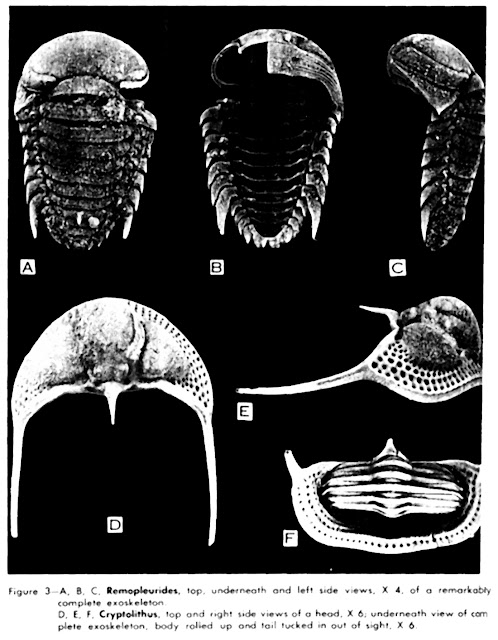