Visual Observation and the Camera Lucida

I have been thinking about the link between optical resolution and science. One of the key tools of science remains detailed visual observation. Until the late 1500's the ability of experimental scientists to detect differences visually was limited by the resolving power of the human eye. In addition, their ability to make detailed records of what they observed was limited by the artistic ability of their eye-brain-hand system. Although our image recording technology is now mainly digital, even today some specialised fields of science rely on the ability of humans to visually resolve differences and make hand drawn records.

For microscopic specimens or macro specimens with very fine detail a camera lucida attachment can be added to an ordinary light microscope. This allows you to view the field of view and trace and draw what you see. Having used one I can recommend it.

I think that we under-appreciate the power of forcing ourselves to draw, it commands us to really see what is going on and to focus on the essentials of the object under scrutiny. In fact it was precisely this aim that motivated the noted English art critic and social thinker John Ruskin (1819 - 1900) to enthusiastically teach workingmen how to draw. He believed that learning to draw would teach people to really see and understand nature and thereby be happier. He told a Royal Commission on Drawing in 1857 that, "My efforts are directed not to making a carpenter an artist, but to making him happier as a carpenter".

The camera lucida is no longer mainstream but research paleontologists such as Simon Conway-Morris (one of key scientists in the re-interpretation of the Burgess Shale fossils) still rely on camera lucida attachments on their light microscope to record the fine details of their fossils. These are great examples of what ET calls Mapped Pictures in Beautiful Evidence. For a recent example see, "New Malacostracan Crustacea from the Carboniferous (Stephanian) Lagerstatte of Montceau-les-mines, France" by Patrick R. Racheboeuf, Frederick R. Schram, and Muriel Vidal in the Journal of Paleontology 83(4):624-629. 2009. This paper includes excellent hand drawn camera lucida images of their newly discovered fossil Crustaceans.

Palaeocaris secretanaeSchram, 1984, MNHN-SOT 12595, Assise de Montceau, Saint-Louis open cast, bed 0. Camera lucida drawings from latex casts; 1-2, latex cast of the left side of the exoskeleton exhibiting the thoracic and pleomere segments; note the occurrence of possible (?) epibiontic organisms on the thoracic segments (bold arrows); the thin arrows indicate the pereion/pleon limit; 3, latex cast of the right side of the anterior part of the exoskeleton; 4, tentative partial reconstruction of the exoskeleton showing only three pleomeres with posterior spinose margin; compare with Fig. 12 of Perrier et al. (2006). Scale bar = 2 mm 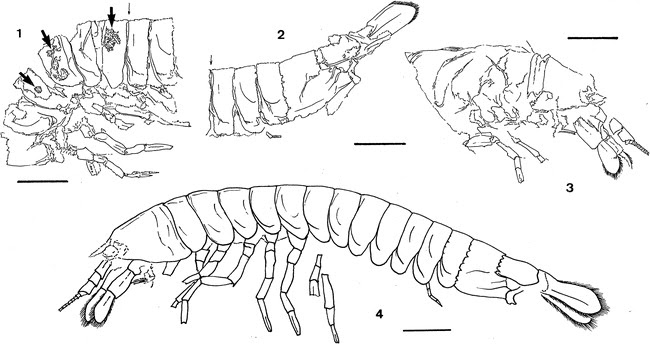