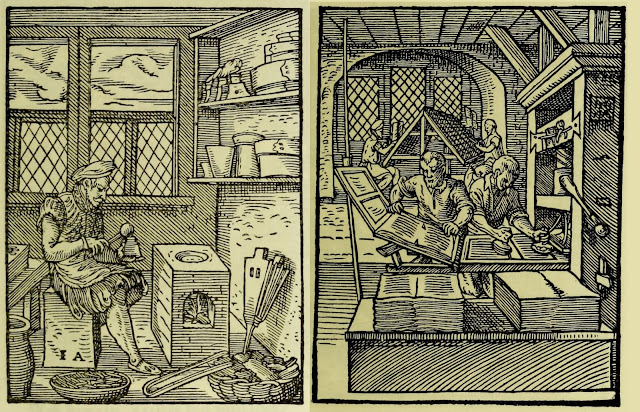 Two woodcuts from Stände und Handwerker by Jost Amman with Verses by Han Sachs - from HERE. This is an 1884 facsimile of the 1568 edition published in Frankfurt by Feyerabend. Left is an illustration of type founding and right printing.
Posted by Matt at 07:40 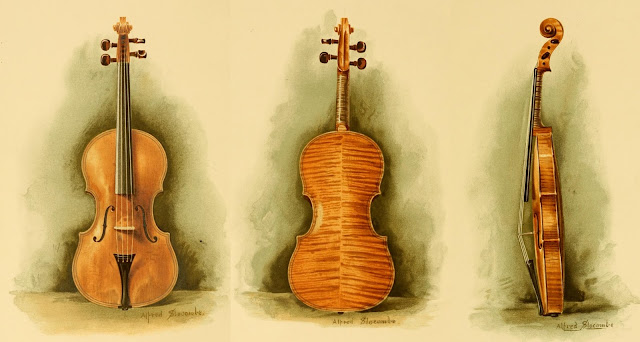 HERE is a brilliant collaboration between Dr Emily Howard, a composer, computer scientist and director of the PRISM team at Royal Northern College of Music, and the Oxford mathematician Professor Marcus du Sautoy.

Image: The front, back and side of the Dumas Viola by Giovanni Paolo Maggini.  From Gio: Paolo Maggini: His Life and Work, Margaret L.Huggins (1892). The authors assert that: "As a specimen of Maggini's violas the Dumas instrument may confidently be pronounced unsurpassable. It will bear comparison with the finest violas of the other great makers."

Mastering the game of Go without human knowledge (2017) 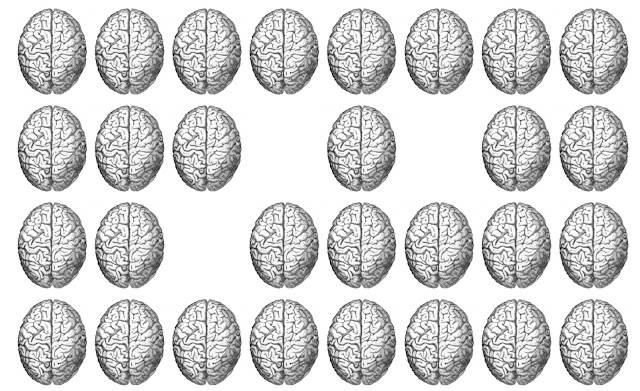 An incredible paper in Nature on a DeepMind AI breakthrough.

A long-standing goal of artificial intelligence is an algorithm that learns, tabula rasa, superhuman proficiency in challenging domains. Recently, AlphaGo became the first program to defeat a world champion in the game of Go. The tree search in AlphaGo evaluated positions and selected moves using deep neural networks. These neural networks were trained by supervised learning from human expert moves, and by reinforcement learning from self-play. Here we introduce an algorithm based solely on reinforcement learning, without human data, guidance or domain knowledge beyond game rules. AlphaGo becomes its own teacher: a neural network is trained to predict AlphaGo’s own move selections and also the winner of AlphaGo’s games. This neural network improves the strength of the tree search, resulting in higher quality move selection and stronger self-play in the next iteration. Starting tabula rasa, our new program AlphaGo Zero achieved superhuman performance, winning 100–0 against the previously published, champion-defeating AlphaGo.

Original paper HERE.
Great write up in The Guardian HERE
Posted by Matt at 20:38

The Deeper Roles of Mathematics in Physical Laws (2015) 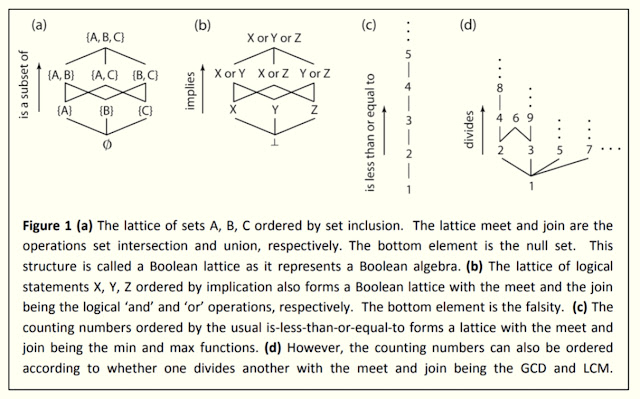 HERE is a really thought provoking essay by the physicist Kevin H. Knuth on the mystery of why mathematics is seemingly universal in the physical sciences. This has some technical content, but not so much, given how profound an argument Knuth is making.

AbstractMany have wondered how mathematics, which appears to be the result of both human creativity and human discovery, can possibly exhibit the degree of success and seemingly-universal applicability to quantifying the physical world as exemplified by the laws of physics. In this essay, I claim that much of the utility of mathematics arises from our choice of description of the physical world coupled with our desire to quantify it. This will be demonstrated in a practical sense by considering one of the most fundamental concepts of mathematics: additivity. This example will be used to show how many physical laws can be derived as constraint equations enforcing relevant symmetries in a sense that is far more fundamental than commonly appreciated.

Below, from his conclusion:

The results here shed light on the long-standing questions surrounding the unreasonable effectiveness of mathematics. We have seen interplay between two different aspects of mathematics. The first aspect is related to ordering and symmetries, and the second aspect is related to quantification and the equations that enable one to quantify things. Our choices in the phenomena that we focus on,the descriptions we adopt and the comparisons that we find important often amount to selecting a particular concept of ordering, which can possesses symmetries. The ordering relation and its symmetries in turn constrain consistent attempts at quantification resulting in constraint equations, which in many cases are related to what are considered to be physical laws. Much of the wonderment surrounding the unreasonable effectiveness of mathematics is not associated with the first aspect of ordering and symmetries since these more clearly depend on a choice of description and comparison, which in turn results in symmetries that can be easily observed and verified. Instead such wonderment is associated with the fact that we have equations that consistently allow us to quantify the physical world, and that these equations not only work very well, but in many cases exhibit some degree of universality. If we consider the equations themselves to be fundamental then the success of mathematics is somewhat of a mystery. But if we step back and release ourselves from familiarity and consider order and symmetry to be fundamental, then we see these equations as rules to constrain our artificial quantifications in accordance with the underlying order and symmetries of our chosen descriptions.
Posted by Matt at 06:51

Quantifying is a Committing Task 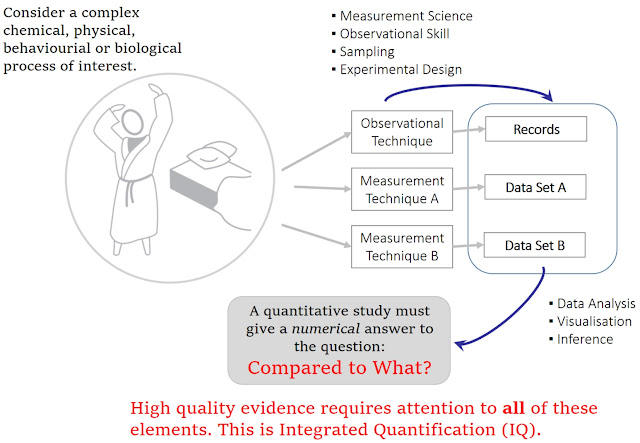 A slide from a talk I gave in Manchester 2014: `Quantifying is a committing task.' (HERE).

The Best Way to Make Sense of the World 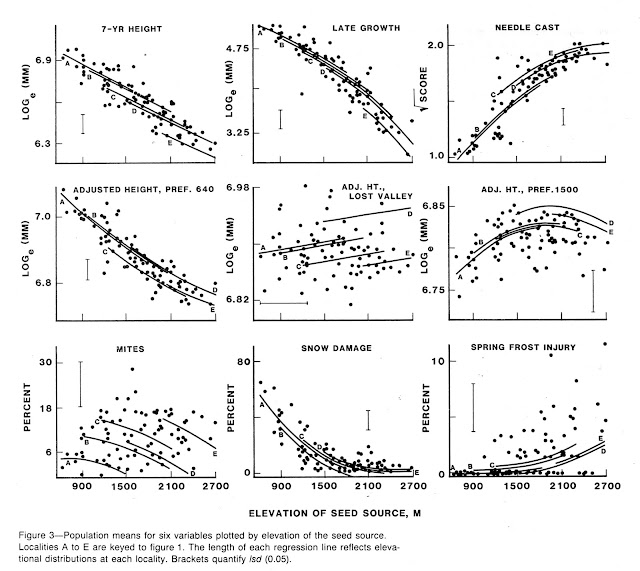 Here is an entertaining profile of the American mathematician Rebecca Goldin - who has "... made it her life’s work to improve quantitative literacy".

Where the Wild Winds Are: Walking Europe's Winds from the Pennines to Provence (2017) 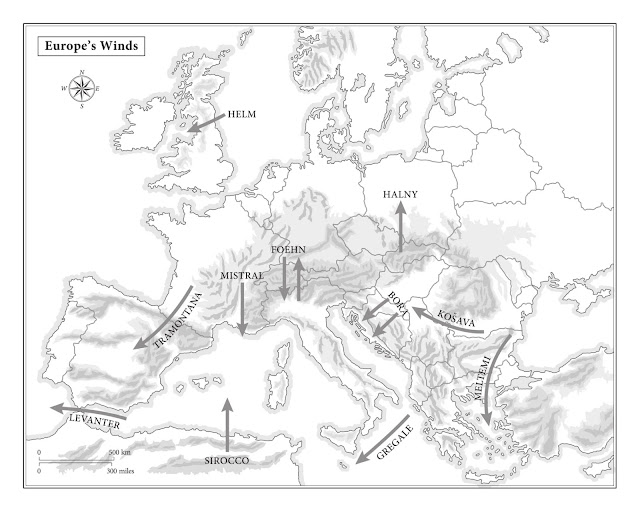 And then one day I saw a map with paths I hadn’t seen before. It was a map of Europe transfigured by coloured lines, marauding arrows like troop advances that ploughed across borders, over land and sea, connecting regions and cultures that seemed quite separate in my mind: Latin with Slavic, continental with coastal, North African with southern European. These mysterious corridors had names every bit as tantalising as the Silk Road or the Camino de Santiago: the Mistral, the Tramontana, the Foehn, the Sirocco, the Bora. There was even one in the north of England, more brusquely named the Helm. The map showed the routes of local winds, which blow with tremendous force at specific times of year – normally at the transitions between seasons, such as when winter turns to spring – and, I was intrigued to discover, they were said to influence everything from architecture to psychology. The fact that these invisible powers had names, rather than simply compass directions that described where they were from, gave them a sense of majesty, even of personality. They sounded like characters I could meet. Those swooping, plunging arrows suggested routes I might follow, trails that had not been walked before. As soon as I saw that map I knew: I would follow the winds.

The Psychology of Good Judgement (1996) 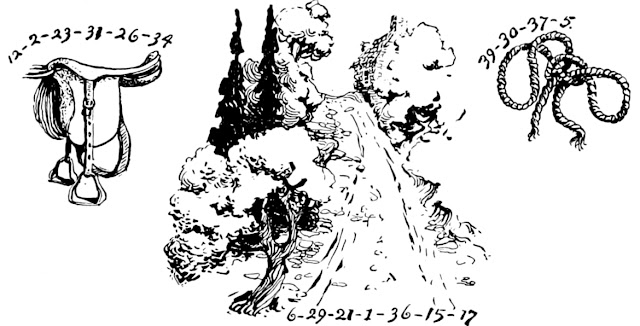 Another of Gerd Gigerenzer's papers on both frequency formats and fast and frugal decision making (HERE).

The Psychology of Good Judgement
Frequency Formats and Simple Algorithms


Mind and environment evolve in tandem—almost a platitude. Much of judgement and decision making research, however, has compared cognition to standard statistical models, rather than to how well it is adapted to its environment. The author argues two points. First, cognitive algorithms are tuned to certain information formats, most likely to those that humans have encountered during their evolutionary history. In particular, Bayesian computations are simpler when the information is in a frequency format than when it is in a probability format. The author investigates whether frequency formats can make physicians reason more often the Bayesian way. Second, cognitive algorithms need to operate under constraints of limited time, knowledge, and computational power, and they need to exploit the structures of their environments. The author describes a fast and frugal algorithm, Take The Best, that violates standard principles of rational inference but can be as accurate as sophisticated "optimal" models for diagnostic inference.

How to Improve Bayesian Reasoning Without Instruction: Frequency Formats (1995) 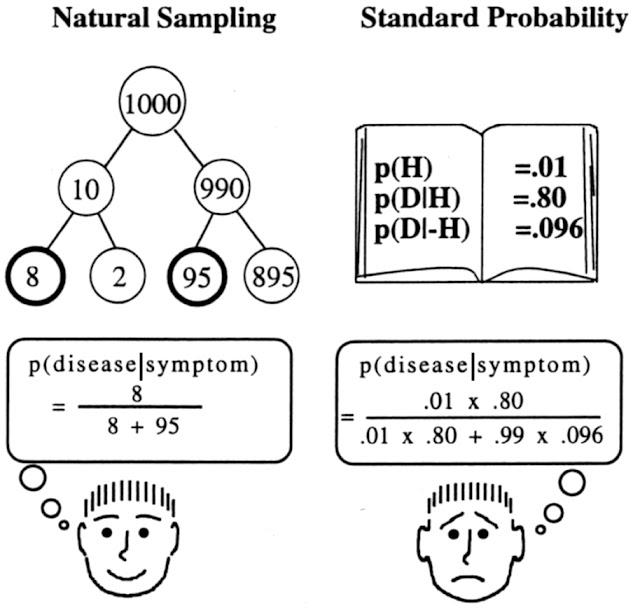 A paper HERE by Gerd Gigerenzer and Ulrich Hoffrage that argues that natural frequencies are a much better way of presenting, examining and discussing arguments based on Bayes Theorem than other approaches. In the paper, Gigerenzer cites Laplace's assertion that “the theory of probability is at bottom nothing more than good sense reduced to a calculus which evaluates that which good minds know by a sort of instinct, without being able to explain how with precision.”
Posted by Matt at 17:25 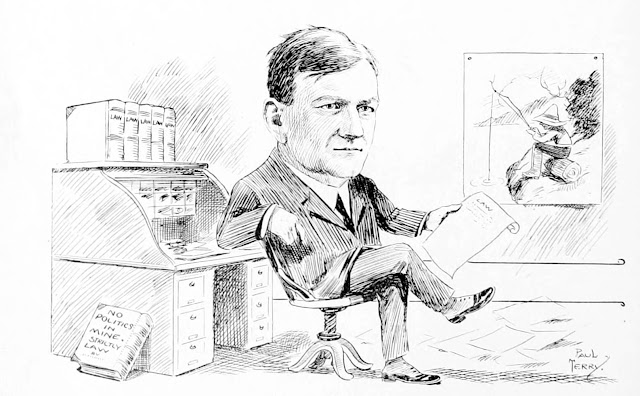 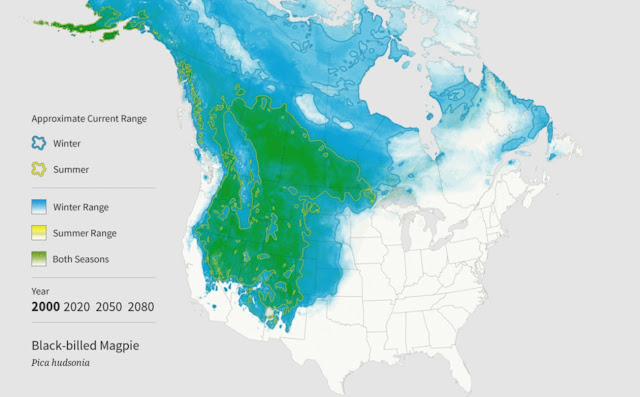 An example map from an excellent talk, Doing Cartography as Professional Amateurs, by Alan McConchie of Stamen Design, San Francisco (HERE).
Posted by Matt at 14:52

The Spirit of Voltaire and Rousseau (1794) 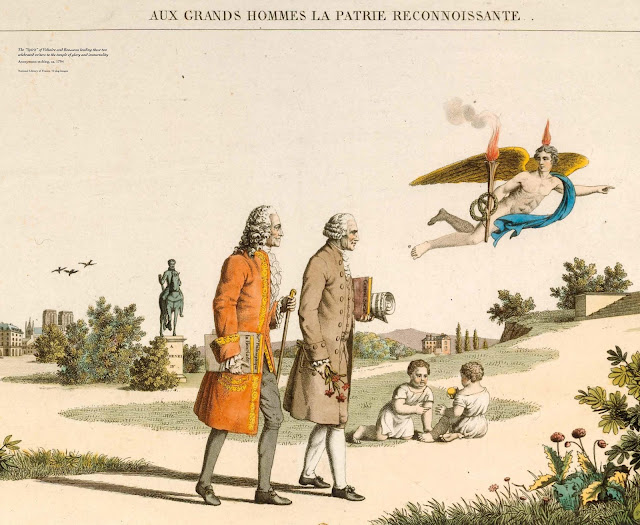 The “Spirit” of Voltaire and Rousseau leading these two celebrated writers to the temple of glory and immortality Anonymous etching, ca. 1794 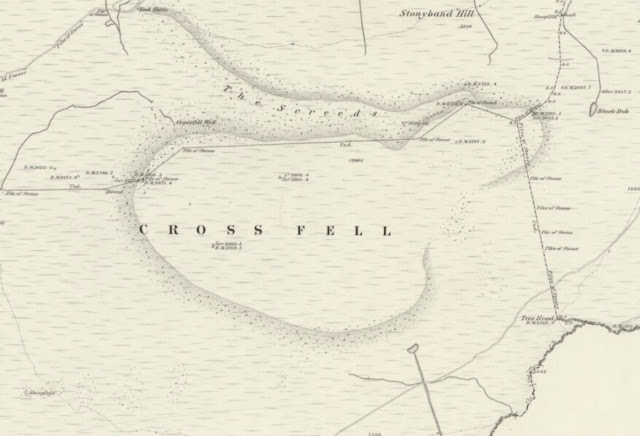 A few remarks on the Helm Wind. By the Rev. William Walton, of Allenheads, near Hexham. Communicated by P. M. Roget, M.D., Sec. U.S.

On the western declivity of a range of mountains, extending from Brampton, in Cumberland, to Brough, in Westmoreland, a distance of 40 miles, a remarkably violent wind occasionally prevails, blowing with tremendous violence down the western slope of the mountain, extending two or three miles over the plain at the base, often overturning horses with carriages, and producing much damage, especially during the period when ripe corn is standing. It is accompanied by a loud noise, like the roaring of distant thunder: and is carefully avoided by travellers in that district, as being fraught with considerable danger. It is termed the helm wind; and its presence is indicated by a belt of clouds, denominated the helm bar, which rests in front of the mountain, three or four miles west of its summit, and apparently at an equal elevation, remaining immoveable during twenty-four or even thirty-six hours, and collecting or attracting to itself all the light clouds which approach it. As long as this bar continues unbroken, the wind blows with unceasing fury, not in gusts, like other storms, but with continued pressure. This wind extends only as far as the spot where the bar is vertical, or immediately over head; while at the distance of a mile farther west, as well as to the east of the summit of the mountain, it is not unfrequently almost a perfect calm. The author details the particulars of an expedition which lie made with a view to investigate the circumstances of this remarkable meteorological phenomenon, and proposes a theory for its explanation. 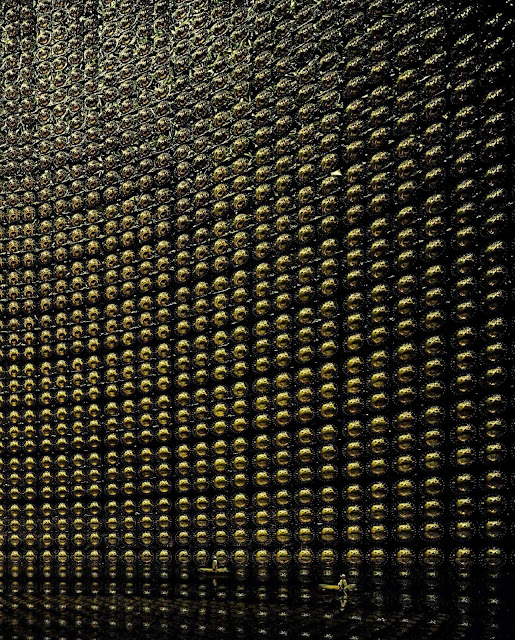 The Super-Kamiokande apparatus!
Posted by Matt at 09:57 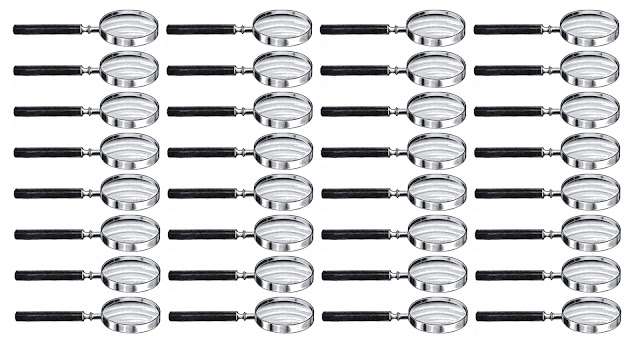 Great piece HERE on how careful high quality observation (not experiment) by Japanese physicists at the Super Kamiokande over a 20 year period have not seen proton decay - and not supported some of the most cherished Grand Unified Theories of theoretical physicists.

Q: How could it be that nature isn't as mathematically beautiful as thousands of mathematical physicists willed that it must be so?
A: The Mind Projection Fallacy strikes again.

Another story to file under the heading of Thomas Henry Huxley's assertion:

The great tragedy of Science - the slaying of a beautiful hypothesis by an ugly fact.
Posted by Matt at 09:26