The background colours of On Kawara’s Date paintings (1987) 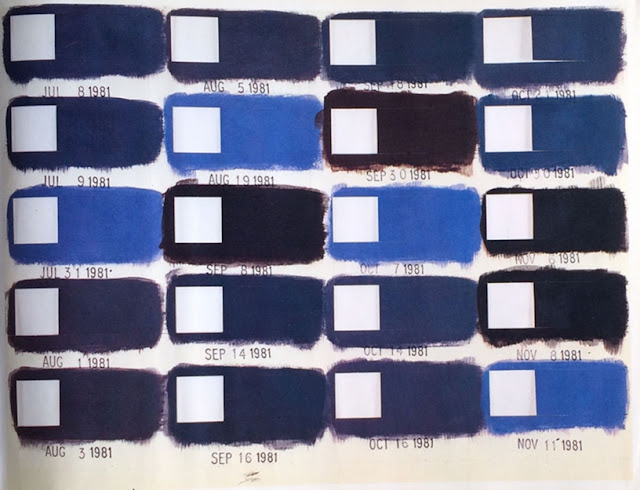 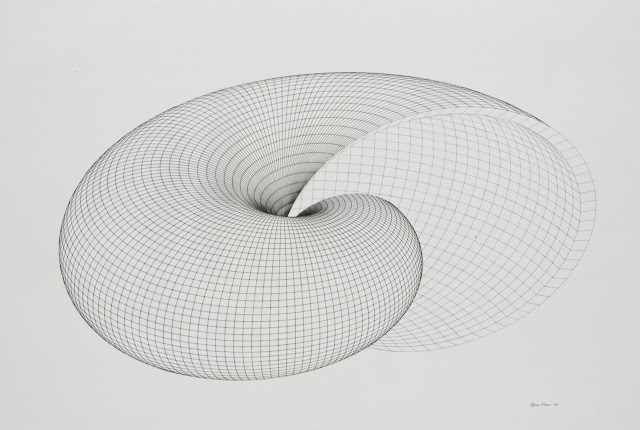 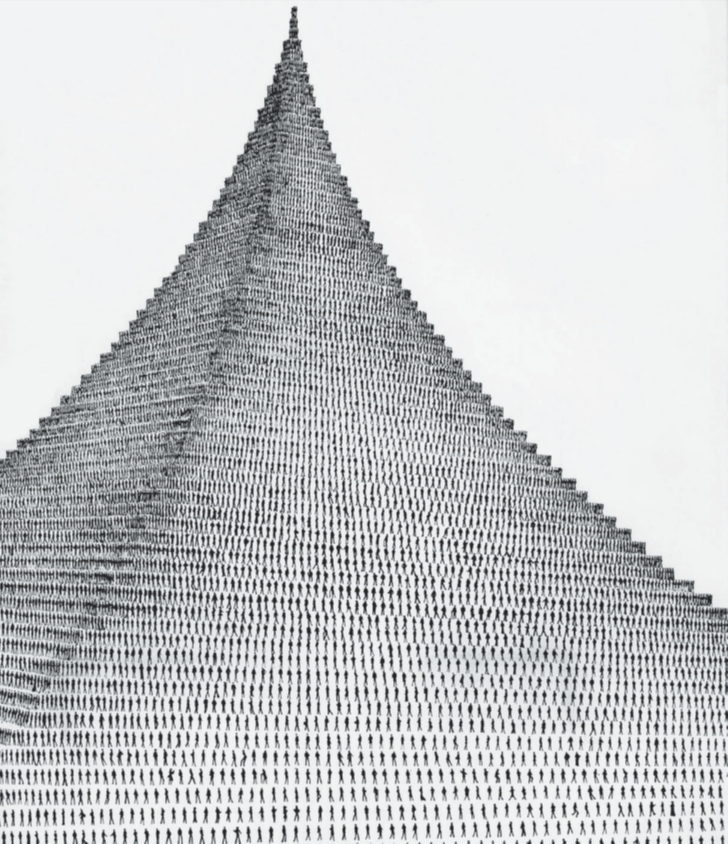 Pascal's Perfect probability Pyramid & The People Paradox a lithograph from 1980 by the artist Agnes Denes. From HERE.
Posted by Matt at 07:11 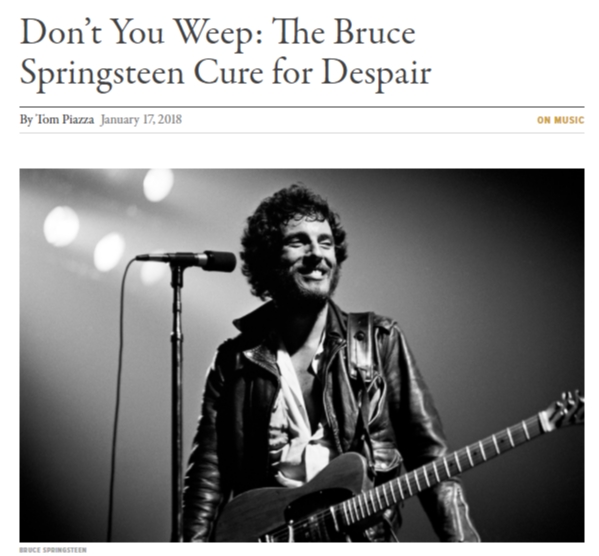 A superb piece in The Paris Review (here), on the first person experience of Tom Piazza hearing Bruce Springsteen at a concert in New Orleans in 2006.

The Preparation of Chlorine, Potassium Chlorate and Sodium Hypochlorite (1948)

Illustration by Roger Hayward for General Chemistry by Linus Pauling. More HERE.
Posted by Matt at 11:51

A great piece about Lego in the Guardian (HERE).

The diagram at top is from a patent filed by Harry Fisher Page in 1945. The diagram to the bottom was filed by G.K. Christiansen in 1958. 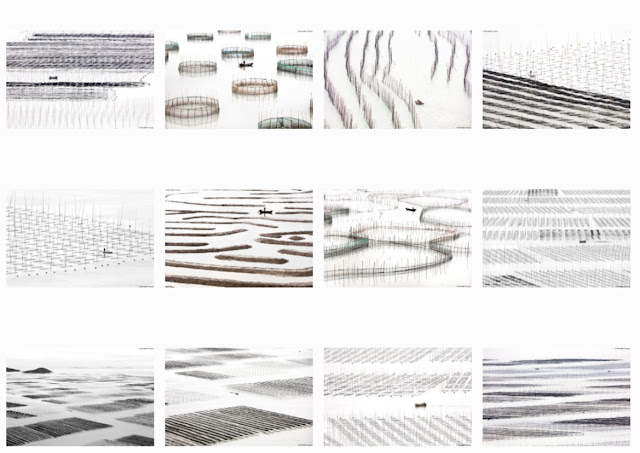 Coastal Geometries is a superb series of photographs by Tugo Cheng of traditional Chinese aquaculture structures off the coast of Fujian (HERE). 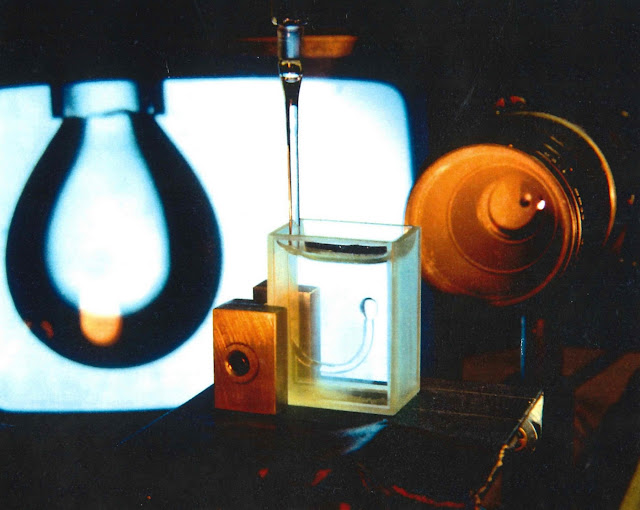 Shown above is an experimental apparatus that I built for my BSc Chemistry degree project in 1991.  It shows a droplet of n-decane oil that is hanging "upwards" in water. The front of the lens and video camera that is being used to image the droplet is shown, and on the monitor at the back is the live video image of the droplet. The project involved building this apparatus, implementing an image analysis method to capture the co-ordinates of the shape of the drop, and writing a non-linear least squares fitting code in C to take the shape of the drop and estimate the interfacial tension between oil and water using the method of Jennings & Pallas (1988).

Below is a visual summary of some of the data from the project. 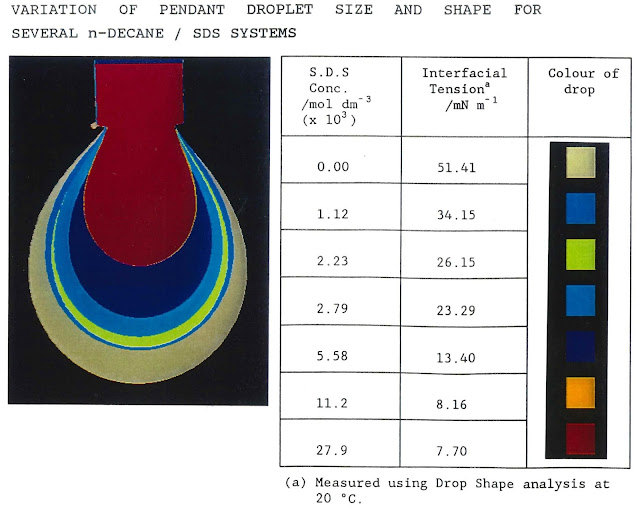 Every Crafter has an Obligation (2017) 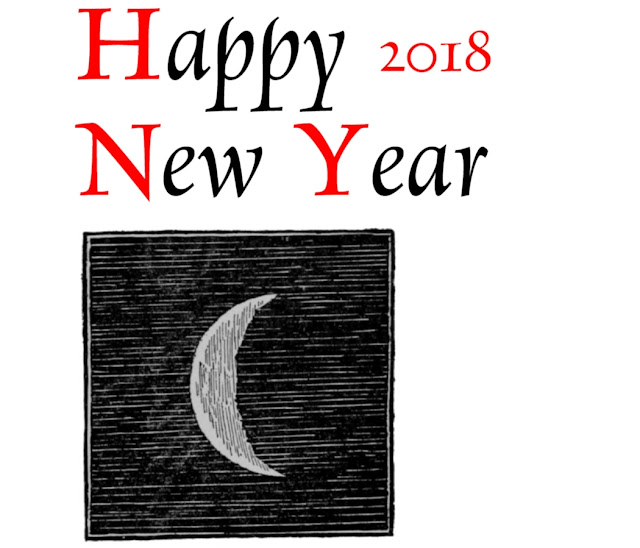 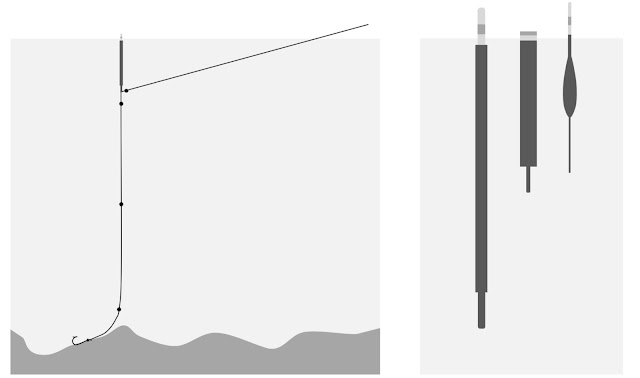 LEFT: A basic rig for still water fishing using a light peacock quill float. Re-drawn from  World Class Match Fishing by Kevin Ashurst (1977). RIGHT: Three different styles of float that can easily be made from peacock quill, bamboo, brass rods, and balsa wood.  The floats are shown submerged to the level required for use.

Between 1974 and 1979, I spent many of my Sunday afternoons trying to catch fish from the Shropshire Union Canal near Chester. This stretch of canal was completed in 1797. It forms part of an extensive network of canals in the North-West of the UK that were built at the start of the Industrial Revolution. By 1974 the Shropshire Union Canal was no longer used for trade - it was a quiet waterway used by a handful of canal boat enthusiasts, and those local fishermen who couldn't afford to fish anywhere better.

Canals are static. Unlike a river, a canal does not flow anywhere. For that reason, they don't usually contain river loving fish such as barbel, dace, chub, trout, grayling, or salmon. The still waters of a typical canal are home to small coarse fish such as roach, rudd, perch, tench, bream, and carp. It takes dedication and skill to successfully catch fish from these canals. The match fisherman Kevin Ashurst (b. 1939) has been fishing these waterways all of his life:

A whole lot of good anglers are, figuratively speaking, at each other's throats every week of the season, trying to sift a little gold from the clapped-out canals which criss-cross the entire region. It is hard fishing. Only the good and dedicated survive to perfect skills requiring very little adaptation to work successfully elsewhere. [1]

I was never a match fisherman. I was not fishing to win anything, for me a good day of canal fishing would involve me in four or five hours of intense, quiet concentration, during which I would be happy to catch five or ten small fish. I once caught a tench from the Shropshire Union canal that weighed just over a kilogram. It was by some way the largest fish that I ever caught.

My favourite fish were  crucian  carp (Carassius carassius).  These beautiful fish are closely related to goldfish (Carassius auratus), and range in colour from silver to greeny - bronze. Crucian carp are native to the UK, and are also found widely across northern Europe and into the arctic circle.  They cross-breed and hybridise readily with goldfish and both species have evolved the ability to survive for extended periods of time in severely oxygen depleted water, such as that found in ponds and lakes that have been frozen over for months. [2]

Crucian carp are not only beautiful to look at, but also relatively easy to catch.  They take a baited hook in a gentle but determined manner that causes the float to dip slowly and purposefully beneath the surface of the canal in a distinctive bobbing manner. When crucian carp are released back into the murky waters of a canal, their coloured flanks leave a metallic gold after-image that lingers long after they have disappeared. [3]

Many of the specialised float fishing techniques that are used on rivers, such as trotting and waggler fishing, have been designed to make use of the river's flow to present bait in an attractive way to the target fish. These techniques are not applicable on lakes, ponds, slow moving rivers, and canals. Here, the need is for a float set-up that can signal to the fisherman that the hook has moved, while minimising the resistance the fish feels as it takes the stationary baited hook.

A basic still water float fishing rig is shown in the Figure above.  The fishing line is usually attached to the base of the float using a small rubber band. This is a flexible arrangement that allows the fisherman to easily adjust the length of line between the float and the hook. The float is weighed down using small round split lead shot of standard sizes; No. 10 (0.04 gram), No. 8 (0.06 gram), No. 6 (0.1 gram) and No. 4 (0.2 gram) are typical for canal fishing. A number of different float designs are shown also in the Figure . In each case the float is designed to support a certain amount of shot and to provide the most stable flotation, unperturbed by wind or surface ripples, but requiring the minimum amount of force to register a bite.

Although professionally made floats were widely available when I was fishing the Shropshire Union canal, I taught myself how to design and make a wide range of my own floats. I had no interest in match fishing, but from Kevin Ashurst's book, World Class Match Fishing, I learnt how to make my own floats.  The raw materials required to make fishing floats were widely available - and could be bought cheaply; bamboo cane, sarkanda reed, balsa wood, crow quills, copper wire, porquepine quills, whipping thread, plastic tubes, cork, fine tying wire, and peacock quills.

My favourite material for float making was peacock quill.  These could be bought cheaply from most fishing tackle shops - complete with their iridescent plumage. Peacock quill is light weight, highly buoyant and naturally water resistant. Before using as a float, the feather's barbs were stripped off with a craft knife and the remaining shaft was lightly sanded. Small inserts of brass or copper wire were added to the base of the float to provide ballast and lower the centre of gravity of the float, and small lengths of bamboo cane or sarkanda reed were inserted into the top.  My floats were finished in dark brown or black paint, finely sanded to remove gloss finish, and the tips painted in white and fluorescent yellow, orange or green. I implemented a simple a coding scheme of small coloured dots painted on the floats to indicate the amount of lead shot that they each one needed, to be perfectly set in the water.

I  no longer make floats, or fish in canals, but I do still invent and innovate. I can no longer remember what drove me to begin making my own floats. It certainly wasn't so that I could win fishing matches, and whether my own floats gave me any real advantage in catching fish from the Shropshire Union canal is hard to tell. What float-making did do, was to provide me with my first real experience of the pleasure that can be found in tinkering for a purpose.  This wasn't based on an artistic creative urge to express myself without constraint, to create artistic originality. I had simply set myself the target of catching fish from the canal using my own floats. Guided by Kevin Ashurst's words and diagrams, I learnt how to experiment and play with a range of simple raw materials to make the artefacts that I needed, to my own design.