Complex movements of hand and eye in Drawing

I have been reading up on drawing - the complex interplay between visual observation and hand coordination required to make a pencil record of what an artist or scientist sees either with the naked eye or with optical aids (lenses, mirrors, camera obscura, camera lucida).
This is clearly of direct interest in art (e.g. the Hockney-Falco thesis) but it is also of real interest in the history of scientific illustration (from the work of Galileo, through that of Audubon to the camera lucida work of Harry Whittington in the Burgess Shale) - as ET put it in Beautiful Evidence "Science and art have in common intense seeing, the wide-eyed observing that generates empirical information".
As mentioned previously with respect to Ruskin drawing forces us to really see. This is true for science as well - Prof Harry Whittington, one of the lead academics on the re-analysis of the Burgess Shale fauna, reflecting on his methods said the following on the occasion of the award of the Geological Society's Wollaston Medal to him in 2001;
"I soon realised, in my work on Burgess Shale fossils, that explanatory drawings would be needed as well as photographs, to describe these fossils. This is where Dr Wollaston enters the scene - a late 18th to early 19th Century physician, who practised in London for many years, and made valuable contributions to chemistry and optics. He had a cracked shaving mirror, but instead of throwing it away he puzzled over the refractions and reflections of light caused by the cracks.
This led to his realising that by inserting a prism into a microscope tube, the image could be directed laterally, then down on to paper beside the microscope, and provide a way to draw an accurate picture. In much refined form this is his invention, the camera lucida, which I used to make my drawings."
Our ability to make detailed records of what we observe is dictated by our artistic ability and the capacity of the human eye-brain-hand system. Drawing is an extremely complex and interesting process requiring high levels of motor co-ordination and only achieved by long practice.
To illustrate this complexity the figure below will repay careful study. It shows a montage of data that was extracted from a study by John Tchalenko and colleagues at Camberwell College of Arts. http://www.arts.ac.uk/research/drawing_cognition/.
In this study they used an eyetracker, movement sensor and close-up video to study how the painter, Humphrey Ocean, drew portraits. Their analysis concentrated on the painter's eye-hand coordination.  They observed that in general his eye closely followed the drawing hand, with fixations on, or very near, the line being drawn. They also found frequent exceptions to this behaviour when the artist's eye moved from the drawing hand to look at other parts of the drawing or he turned to look at the model. The study concludes that they show evidence, `illustrating the process of visual memory fading and refreshing, and the possible action of a motor memory component in the drawing method of this painter'.
The figure to the right shows data about the fixation of the eye above the horizontal line and data about the position of the hand below it as the artist composed the portrait of Nick to the left. In both cases vertical distance away from the horizontal line corresponds to physical distance away from the paper; which is the physical fulcrum of the exercise (eye, pencil and paper come together). There is an initial period of practice during which no contact is made between paper and pencil but the eye flicks back and forward from the model to tracking the pencil. Then the eye focuses on the paper and immediately fater the pencil hits the paper to begin the first four strokes H1-H4. These take 2.68 seconds and a total of 10 cm of pencil stroke is created. The eye evaluates what the pencil has done then back onto the model and so on.
The graphic is quite special - the physical paper is represented by a horizontal line and the two times series (eye data and hand data) are running in synchrony.

The camera lucida is an optical component that fits into the optical train of the light microscope in such a manner that when observing the specimen through the eyepiece you can simultaneously see your piece of paper and pencil and the drawing you are doing.
Artists use macroscopic versions of this device -  and David Hockney in his book Secret Knowledge uses a Camera lucida to replicate the rapid and accurate sketching style of Ingres drawings - http://www.koopfilms.com/hockney/articles.html).
Using a camera lucida is not a tracing task nor just copying - it requires an ability to choose which details are most important to record to make an accurate record of the specimen.   It does not use hardware and the image recording medium is paper and pencil (or pen).
The field of paleontology still makes heavy use of camera lucida drawings to illustrate research papers - they have found that photographic reproduction of a faint impression on a dark background does not reveal the detail that they can see with the human eye through a stereo microscope.
Interestingly one of the most famous paleontological stories of the past 30 years - the re-discovery of the Burgess Shale fossils - was facilitated by camera lucida drawings - here is the lead academic Harry Whittington reflecting on it;
"I soon realised, in my work on Burgess Shale fossils, that explanatory drawings would be needed as well as photographs, to describe these fossils. This is where Dr Wollaston enters the scene - a late 18th to early 19th Century physician, who practised in London for many years, and made valuable contributions to chemistry and optics. He had a cracked shaving mirror, but instead of throwing it away he puzzled over the refractions and reflections of light caused by the cracks.
This led to his realising that by inserting a prism into a microscope tube, the image could be directed laterally, then down on to paper beside the microscope, and provide a way to draw an accurate picture. In much refined form this is his invention, the camera lucida, which I used to make my drawings."
http://www.geolsoc.org.uk/gsl/society/history/page2986.html
Here is a camera lucida drawing of an anomalocaris fossil trilobite from http://www.trilobites.info/species.html

See my post below about the Erics family tree.
Pete Frame has now set up a website where you can buy high quality large prints of the graphics - it also has a nice web browse facility - here is the one for the Beatles family tree.
Posted by Matt at 20:57

Here is a large and very detailed Rock Family tree graphic drawn by Pete Frame. This one has a personal connection for me. It describes the hugely energising creative outburst of bands that happened in Liverpool UK in the early 1980's and centred around the famous Erics club, which opened on October 1, 1976 in a building basement on Mathew Street opposite The Cavern Club where The Beatles had played.
Pete Frame had this to say in his graphic;
"For the second time in twenty years, Liverpool is the most exciting city in the whole rock world. In my few days there, I became so intoxicated with the place that I collected far too much information for one family tree - so what you see here is the basic framework for a wall-size effort."
I lived locally and went to Erics and other clubs around often enough to have seen or heard of most of the bands or people on this graphic. 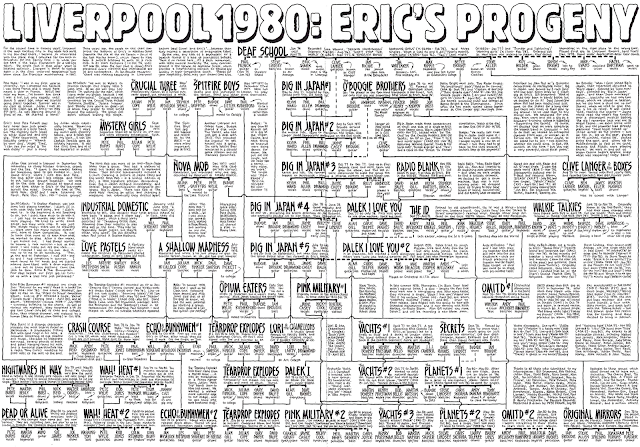 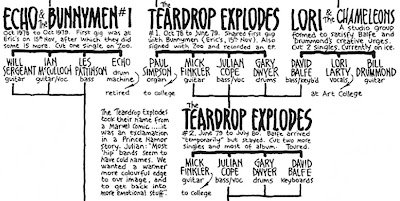 Here is a website and book celebrating found art and typography on the streets of Liverpool.
http://www.letterpool.com/ 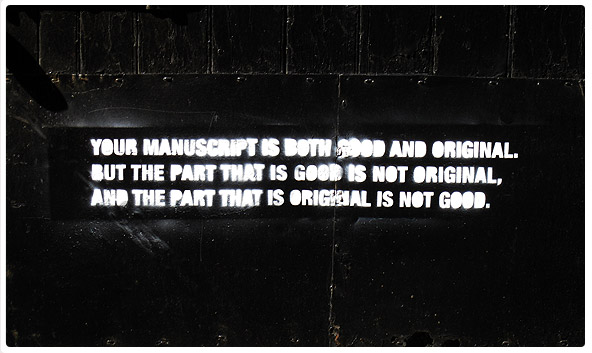 Here is a very nice use of postage stamps as small multiples forming part of an invitation to a talk on Postage Stamps by Type Designers: A Primer. Held at The Typophiles on Wednesday, September 23, 2009 at the National Arts Club. The talk was by Michael Russem the principal of the Kat Ran Press of Cambridge, Massachusetts - http://www.katranpress.com/news.html.

A visual Pun on fixed point theorems (I think)

Under the heading 'Self-Description' Randall Munroe has a very thought provoking comic strip that is a visual pun on fixed point theorems, i.e. a function f that has at least one fixed point, a point x for which f(x) = x.
http://xkcd.com/688/

Feynman and Tufte on Science

I posted this on Ask E.T.


Browsing my copy of Feynmans lectures on Physics Vol 1 (admittedly to look at the page design). Page 1-1 has the following;
"The principle of science, the definition, almost, is the following: The test of all knowledge is experiment."
This still looks good to me after all these years.
Edward Tuftes response is;


The Principle of Science
It seems to me that The Deep Principle of Science is this: every empirical observation is a manifestation of the operations of Nature's universal laws. Thus the physical sciences are distinguished from the social sciences by the marvelous guarantee that whatever is observed in physical science is a product of universal laws. And the core principle in scientific verification is this: theories are confirmed or disconfirmed by empirical observation. In Feynman's statement, if "experiment" means what is usually means--the systematic manipulation of causes (to see their effects) in otherwise tightly controlled situations--then that would place astronomy, weather, and cosmology outside of Feynman's principle of science. In those fields, manipulations typical of experiments are generally impossible.
January 13, 2010

Most  type-designs are derived from a craft that is 100's of years old. Good examples of the earliest type faces are hard to get. But now the Amsterdam professor for the History of the Book (Paul Dijstelberge) has started to publish high resolution pictures of early type-specimen on: http://www.flickr.com/photos/bookhistorian/.
This will take years -  about 6500 pictures so far.
Here is a small multiple of the type of albert Durer (1530). 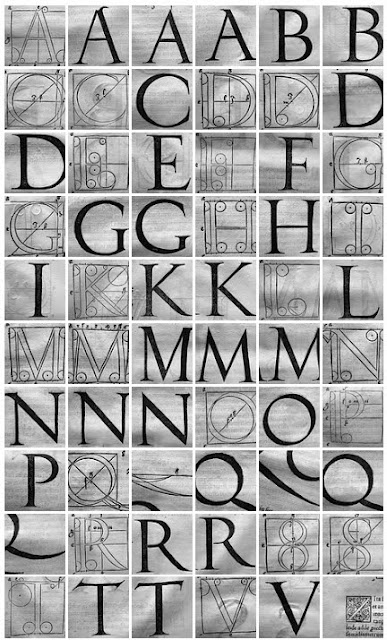 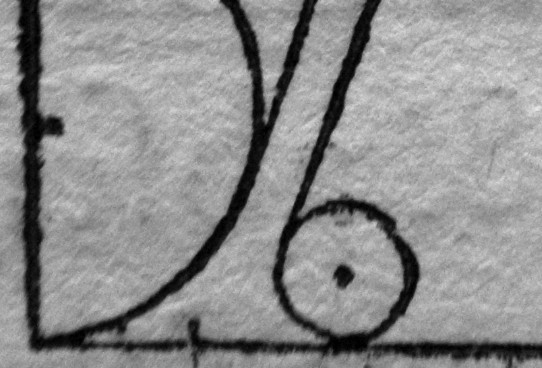 Here is a terrific hierarchical small multiple. This shows a wall calendar of a years worth of dates, sub-dividied into months. Each date image is an individual door number found in the streets of Stockholm. The holes holding the calendar up are colour coded with a dominant colour that follows the seasons. The calendar has an appendix with the addresses of where the numbers were found.
http://www.urbncal.com/vaggkalender-wall-calendar/ 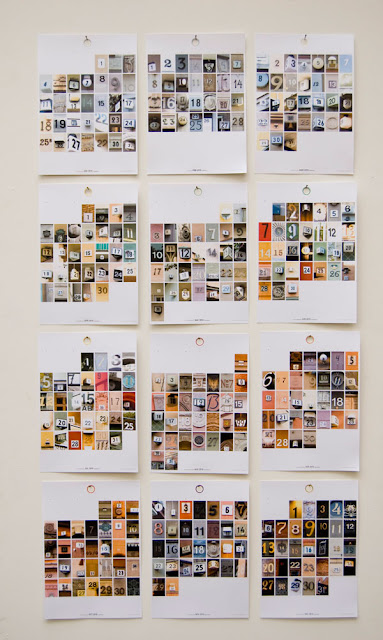 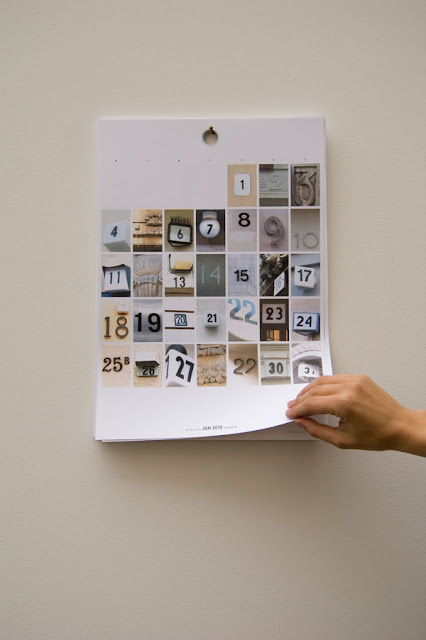