The Most Beautiful Experiment in Physics (1976) 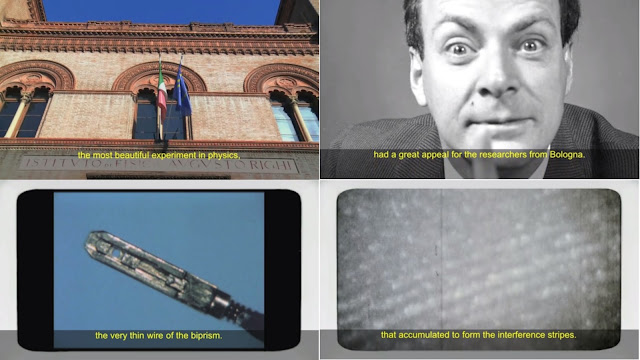 In 2002 readers of Physics World voted Young’s double-slit experiment with single electrons as “the most beautiful experiment in physics” of all time. Although not credited by Physics World at the time, the physicists Pier Giorgio Merli, Gian Franco Missiroli, and Giulio Pozzi had carried out this experiment in a collaboration between the Italian Research Council and the University of Bologna almost three decades earlier.

The Bologna team had also made a movie for teaching purposes because the experience of watching an interference pattern build up electron by electron was so moving to them that they wanted to share this.


The stills above are from a wonderful movie made in 2010 that describes how the Italian physicsts carried out the experiment, the original movie they made and what they now think of their experiment ( HERE).

From the 2010 film, Gian Franco Missiroli explains why they made the original film:


For the experiment it was important to visualize it not just as a few shots that one can show in an article, but as a detailed sequence of hundreds of frames where you see the step by step growth of the interference pattern, with a psychological and emotional impact stronger than the one given by watching a photo in a scientific paper.

...because the growth of the interference pattern was something so ...touching so - from an expressive point of view - ...convincing, that a movie was the right way to show it.

A recent appraisal of this beautiful experiment is HERE.