This means that as science develops the explanations that are put forward to explain a phenomena, no matter how complex, are constrained by physical law (see the First Law of Biology HERE). In the social sciences this is generally not the case. There is not a law in social science that is analagous with gravity (except of course gravity does act on all human beings all the time, but generally this doesn't seem to affect how people act).

However, I have just found an example of a law of social science; the law of unintended consequences, that may be like gravity in that it is at work always and everywhere (Wikipedia entry HERE and Encyclopedia of economics entry HERE).

The law has been discussed by philosophers and economists for centuries (including Adam Smith, John Locke etc), but it was brilliantly explained by the sociologist Robert K Merton in a 1936 paper "The Unanticipated Consequences of Purposive Social Action" (HERE).
Merton lists listed five causes of unanticipated consequences [1] Ignorance, [2] Error [3]  Immediacy of interest - which can override a long-term interest [4]   Basic values. which may need  certain actions (or prohibit them) even if the long-term result might be unfavorable  and [5]  Self-defeating prediction. In which  the enunciation of the prediction actually leads to a change.

In 1936 he promised to write a book about this law, which he worked on until he died in 2003, but did not publish. Edward Tufte rates this article as "maybe the best paper ever in social science" (HERE). 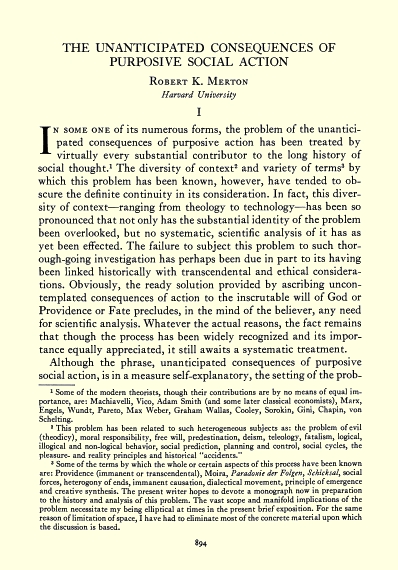 You can find a PDF of the paper HERE.