The world of mycology, the study of the biology of fungi in all of its various guises, is a relatively cloistered one and is rarely in the forefront of peoples minds (though without fungi we would not have bread, beer, wine or soy sauce). Fungi have for centuries been treated as part of the plant kingdom and most breakthroughs historically have been by botanists. More recently there has been a change and from an evolutionary point of view fungi are classified as a separate kingdom, that are genetically closer to the animal kingdom than they are to plants.


Pioneering mycologists have included the Swede Elias Magnus Fries (1794-1878), the South African Christian Hendrik Persoon (1761-1836), the German Anton de Bary (1831-1888) and the German-American Lewis David von Schweinitz (1780-1834). In the past 100 years or so British mycologists have had a major impact worldwide on this field of science and the British Mycological Society, which was founded in 1896, has been a key learned society in mycology for over a hundred years. The BMS has had many notable members, but perhaps the most interesting of all of these mycologists to non-experts, was the incredible Anglo-Irish scholar Prof. Cecil Terence Ingold (1905-2010).

Ingold was born in Blackrock, Dublin in 1905, the son of an English born National Education Officer Edwin George Ingold and his wife Gertrude Ingold. By 1911 Ingold and his family (including his sister Kathleen and their servant Isabella Hawthorne) were living in Donaghodee Road, Bangor County Down.


Ingold attended Queen's University Belfast and graduated with a first-class honours degree in Botany in 1926. He then took up a one-year scholarship at the Royal College of Science in London, studying with Sir John Farmer in the school of botany. By 1929 he had completed a PhD and been appointed a lecturer at Reading University, then lecturer in charge of botany (1937-44) at University College, Leicester. It was whilst he was in Leicester that Ingold found a form of water borne fungi in a foam that he found in the brook near his house. This discovery led him to write a paper in 1942 that described 16 species and 13 genera, in total he discovered hundreds of species of these fungi. They are now known as Ingoldian fungi in his honour.

Ingold formally "retired" from his University post at age 67, but just carried on working at home. When he was 80 he had a festscrift in his honour that listed 174 publications. But he still hadn't finished, in fact he carried on to publish another 100 papers after this and his last scientific paper was published when he was 93.

Above all else Ingold was a phenomenal field observer and experimentalist. Many of his papers and books are illustrated with his own line-drawings, both macroscopic and also microscopic camera lucida derived images. He also used a water drop technique in which he observed the spore development of a fungi of interest over time and he made repeated drawings to illustrate the course of development.

The figure below is a re-coloured and slightly modified line drawing made by Ingold that shows a Gyoerffyella craginiformis, a conidium from ditch scum at Wheatfen Broad (Ingold & Ellis 1952). Notice the carefully hand drawn 50 micron scale bar. This is the sign of careful camera lucida observational technique. Assuming the scale of an image, or reporting the magnification of the optical set up used to make the image, do not pin down the observed conidium to a real-world scale.  These are two ways of de-quantifying a scientific image.  Ingold doesn't do this. His observations, as recorded with these simple and elegant line drawings, are images that have been created with Intense Seeing. 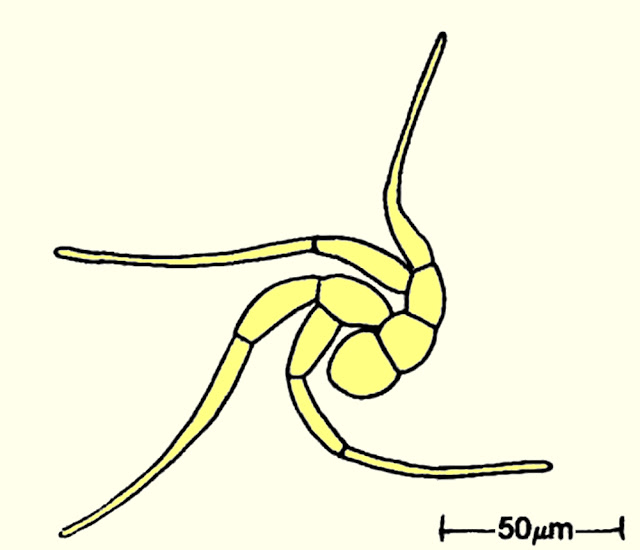 Obituaries of C.T. Ingold in the Guardian and Independent

Ingold, C.T. & Ellis, E.A. (1952). On some hyphomycete spores including those of Tetracladium maxilliformis, from Wheatfen. Transactions of the British Mycological Society, 35, 158-61.