How long is the Mississippi - the 1933 Longimeter

The Steinhaus longimeter was patented in Germany in 1933 by the the Polish mathematician Professor Hugo Steinhaus (1887 – 1972) , it is simple instrument that can be used to estimate the length of a complex curved feature on a map, e.g. a river.

The instrument consists of a transparent sheet with three perpendicular grids spaced by 3.82 millimetres and each turned by 30 degrees. The length estimate is made by counting the crossings of the curve with the grid lines. The number of crossings is the approximate length of the curve in millimetres.

Steinhaus was sufficiently taken with this excellent idea that he filed a German patent to protect it in 1933, patent number DRGM 1241513.

An explanation of how the Longimeter works was given by Steinhaus in his book Mathematical Snapshots published in 1950 by Oxford University Press. 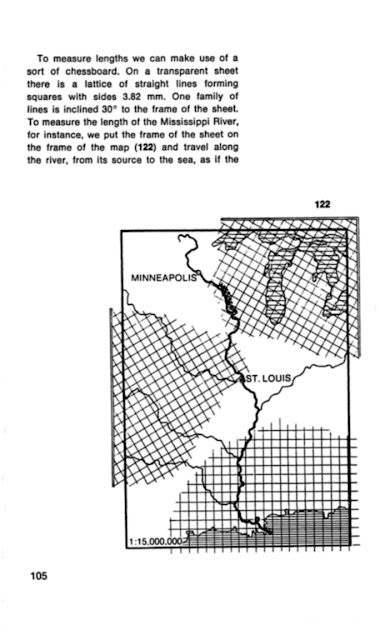 Perhaps unsurprisingly, with Steinhaus' interest in measuring complex linear geographical features, he was the peer reviewer of Benoit Mandelbrot's landmark paper on fractal geometery; How long is the coast of Britain? Statistical self-similarity and fractional dimension. Science: 156, 1967, 636-638.


[The British cartographic society estimate that the coastline of Britain is about 31,368 km.]