The working drawings of Hokusai

At fifteen I set my heart on learning.
At thirty, I was firmly established.
At forty I had no more doubts.
At fifty, I knew the will of Heaven.
At sixty, I was ready to listen to it.
At seventy, I could follow my heart's desire without transgressing what was right.
Here is an incredible collection of his working drawings. Also the content of the site is described in the following;
Orientations Magazine
Volume 40 - Number 6 - September 2009

While Hokusai is viewed today as one of Japan's greatest artists, and certainly one of the most prolific, the study of his oeuvre has been hindered by the scarcity of his drawings. Until recently, only ten dating from his apprenticeship years and a few dozen from his later life were known. The recent discovery - in a private European collection - of 24 sheets of preparatory sketches and drawings for illustrations printed between 1807 and 1815 has filled a void. Meticulous examination of these works has shed some light on the period when Hokusai was at the peak of his artistic mastery, and has led to a series of striking discoveries about his working methods.

For me one of the most interesting aspects of this study is a series of very detailed comparisons between the published prints and corresponding preparatory sketches.
"Inquiry into  instructions for the next drawing.

An unknown feature before the discovery of these drawings, they constitute one of the major discoveries made in the course of this research. It all began when strange peculiarities that repeated in one drawing after another were remarked. The most common was the regularity with which the decoration of numerous items of clothing is carefully indicated, but only once or twice.  Another good example is the treatment of the clumps of pine needles: generally, a very few individual clumps are drawn needle by needle with a decisive stroke, while the other clumps are merely indicated by means of an evasive circle. 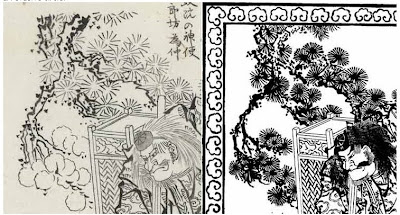