Little White Bugs in a Shaft of Sunlight (2016)

In the early years of the 20th century, whilst working on Maxwell's equations and Einstein's theory of special relativity, the Polish-German mathematician Hermann Minkowski (1864-1909) found that it was necessary to meld together three Euclidian dimensions of space and one dimension of time to create a new four dimensional spacetime. (see Corry, L. (1997) `Hermann Minkowski and the postulate of relativity', Archive for History of Exact Sciences, 51(4), pp 273-314 for more background).  One of the concepts that Minkowski develops is that of a spacetime thread (also known as a world-line) - which maps out the x,y,z position of an element of matter over time.

It is hard to imagine such a world-line, but the superb video of small insects flying in a shaft of sunlight in Rhode Island, is a good way of visualising how such a world-line develops. This was filmed by Dennis Hlynsky, a Professor and Dept Head of the Film/Animation/video Department at the Rhode Island School of Design. Recorded with the Black Magic pocket cinema camera in RAW, 29.9 fps 1920x1080 shutter 360 ISO200, Processed with Adobe After Effects CC. Full Video HERE. 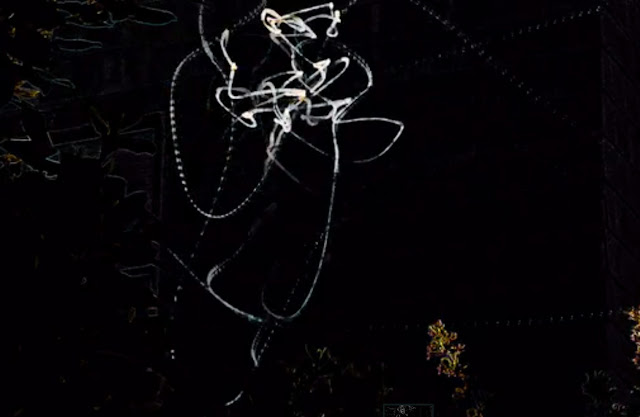