The English language is enormously flexible, but in order to describe intensity we generally need to bring together two or three separate words; heavy rain, deafening roar, blinding light. Linguistically this is rather inelegant when we compare English with language systems that have special and direct ways of expressing intensity.


For example, the Nahuatl languages and dialects of the Uto-Aztecan language family of Mesoamerica have an special `intensive' aspectual category in their language that indicates something has great intensity;

This Nahuatl word iita is a handy shorthand for intense seeing. 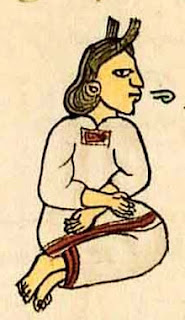 An image of a Nahua woman from the Florentine Codex. The speech scroll indicates that she is speaking.
Posted by Matt at 20:32