The writer Adam Gopkin describes a number of examples of the ‘excellent eye’ of Charles Darwin in his book  Angels and Apes. Quercus. London.

pg 65: (Discussing the worm and orchid books).
‘He looks as hard as he can, and sees processes, not just plants—his worms are actors, makers of vegetable mold and capable of primitive conciousness and, as we’ll see, even an innate musicality—and this act of looking and organising is for him the probity of the intelligence. ’

‘Darwin always thought as he saw; “I am a firm believer that without speculation there is no good and original observation”.

pg 69: Talking about The Voyage of the Beagle
‘But what really knocks us out now is how much pure observation, pure plain looking,
there is in Darwin’s book. e poetry lies in the sweep of the seeing. ’

pg 72: ‘As one reads  The Voyage of the Beagle, Darwin’s Argus–eyed relentless sheer seeing—his endless observations of spiders and vultures and snakes and beetles, of what it takes to check on the fatness of a tortoise of a lizard’s method of swimming—is what is overwhelming. ’

pg 73: ‘. . .Darwin is, with Ruskin, the greatest pure observer and describer of his time.’

pg 80: From Darwins notebooks in 1830's;
“All science is reason acting / systematizing/ on principes which even animals know (art precedes science -art is experience & observation)" 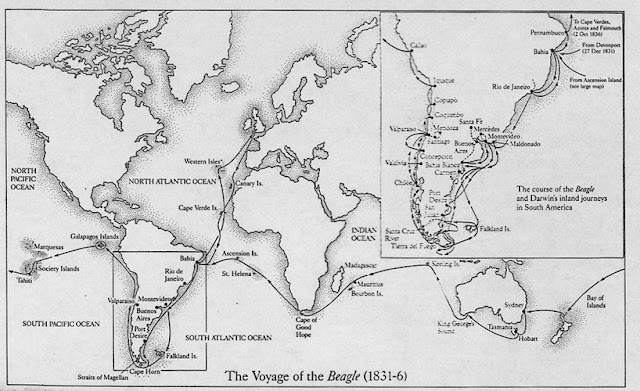