Joseph Moxon's fame rests largely on his two volumes of Mechanick Exercises. These tracts were printed originally as 14 separate pamphlets after which they were collected and reprinted.  Moxon's Mechanick Exercises was written and published to give it's readers basic instructions in all of the chief trades of his day.  Between 1677 and 1680 Moxon published fourteen of these exercises; including smithying, joining, carpentry and related arts.  This book was the first book in England to be published in parts, or fascicules.

That Geometry, Astronomy, Perspective, Musick, Navigation, Archtecture, etc are excellent Sciences, all that know but their very Names will confess: yet to what purpose would geometry serve, were it not to contrive Rules for Hand-Works? Or how could Astronomy be known to any perfection, but by instruments made by Hand? What Perspective should we have to delight our Sight? What Musick to ravish our Ears? What Navigation to Guard and Enrich our Country? Or what Architecture to defend us from the inconvenience of different weather, without Manual Operations?

The American engineer Eugene Ferguson (1916--2004) has made a compelling argument that engineers and other technologists have habitually used visual and other non-verbal thinking since the Renaissance. [Ferguson, E. (1994). Engineering and the Mind's Eye. MIT Press.] Engineers actively engaged in the creative process of design use deeply visual means to develop, share and modify their ideas.  Ferguson has traced over the past five centuries the parallel history of textual descriptions and their often interdependent visual descriptions. Furthermore, Ferguson argues that these visual representations are not accidental, they are a fundamental facet of the way an engineers mind's eye works;

The mind's eye, the locus of our images of remembered reality and imagined contrivance, is an organ of incredible capacity and subtlety. Collecting and interpreting much more than the information (entering the optical eyes), the mind's eye is an organ in which a lifetime of sensory information (in all its forms) -- is stored, interconnected and interrelated.

One example used by Ferguson to illustrate the development of the Mind's Eye, is the movement of scientists who were inspired by the philosopy and scientific method of Francis Bacon --  both his Novum Organum a philosophical work in Latin published in 1620 and his utopian novel {New Atlantis, published in English in 1627.  Bacons' grand scheme was to  enhance the power  and greatness  of  man through the application of new science.  One of the components of this project was what Bacon called the natural histories of trades; detailed descriptions of the technical information that had been kept secret in the trade guilds and workshops for hundreds of years. Bacon thought that by making public the details of the tools, techniques and processes used in the crafts it would lead to an improvement of this practical knowledge by scholars and also general progress derived from the development and application of this technical knowledge.
In spite of a number of serious attempts, the Royal Society itself never did publish the series of natural histories of trades envisioned by Bacon.  The fellows of the Royal Society were, by and large, educated gentlemen with little or no connection to the practical goings-on of the workshops in which the ancient crafts and arts were actually practiced.  Even if they had  been better connected the secrets of the trades were deliberately obscured by the master craftsmen to protect their livelihoods.  So in spite of Francis Bacons' impetus and the good intentions of some of the founders of the Royal Society, in fact it was left to a single man, Joseph Moxon, to do what `a whole variety of well-meaning gentlemen could not'. [Preface by B. Forman and C. F. Montgomery, Eds. Joseph Moxon (1703). Mechanick Exercises, or the Doctrine of Handy-Works. Praeger, New York, 1970.]
Joseph Moxon began sharing the arcane knowledge of Handy-works he had gained by writing and publishing and in this endeavour was directly inspired by Bacon. In the preface to volume one he says;

The Lord Bacon in his `Natural History' reckons that philosophy would be improved by having the secrets of all trades lye open; not only because much experimental philosophy is caught among them, but also that the trades themselves might by a philosopher be improved.

Moxon was well placed to meet the challenge posed by Bacon, in this context David Pankow notes; `... the pioneers of manufacturing technology and scientific inquiry were prying away at the rotting doors of medieval trade secrecy.' [Pankow, D. (2005). The Printers Manual. An Illustrated History. RIT Cary Graphics Arts Press. Rochester, New York.] 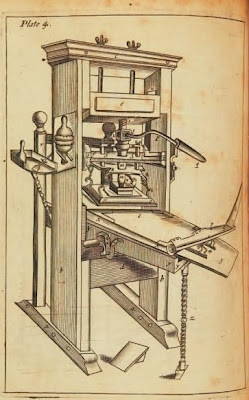 Whereas today it is possibe to argue that the global economy is converging on a single, highly interconnected, knowledge economy, the knowledge economies of previous era's were much more localised and in some cases they can be identified with small groups of gifted, industrious and like minded individuals. For example, the Royal Society of London for Improving Natural Knowledge, now known almost universally as The Royal Society, which was founded in London in November 1660, can be thought of as an early, and rather localised, example of a knowledge economy.


Historically, the Royal Society has always emphasised the importance of openly disseminating new scientific knowledge via books and periodicals; it has been publishing Philosophical Transactions of the Royal Society since March 1665 which makes it the longest-running scientific journal in the world. Also in 1665 it began publishing significant scientific books, the first being Robert Hooke's incredible visual monograph, Micrographia.
Running in parallel with the official early publications of the Royal Society, there is a collection of periodicals and books from this period that were published by a little known fellow of the Royal Society, Joseph Moxon (1627-1691), at his own expense and under his own imprint the sign of the Atlas, variously located in Ludgate Hill and Cornhill in London.
But Joseph Moxon was not simply a printer of technical books. In spite of his puritanical and rather humble background he was appointed Royal Hydrographer to King Charles II in January 1662, a position in which Moxon was responsible for maintaining official charts of ocean navigation routes. In addition, as a consequence of being on good personal terms with dozens of the founding scientific members of the Royal Society, he was elected as a fellow of the Royal Society in 1678. Unlike most of the early fellows of the Royal Society, Joseph Moxon himself was neither a gentleman nor a scientist. He wrote, printed and sold books on mechanics, the printing trades, geometry, mathematics and perspective, he typeset and published books full of logarithm tables and he designed and built celestial and terrestrial globes and printed and published books of maps and sea-plats.
Looking back from a vantage point nearly 400 years later, it is difficult to understand Moxon's output as a coherent body of work. His translations and original works, as well as his globes and maps, appear to be a random collection of items that would be of interest to a typical scientific gentleman of the Royal Society. But this characterisation would be an injustice to Joseph Moxon. Although he certainly was not a gentleman scientist, he had an important role to play in the knowledge economy of restoration England. He was an early example of a highly visual and entrepreneurial technologist, who not only made a good living from the practical application of scientific knowledge, but also had a real desire to open up the secrets of the craft guilds of his time, so that other people could learn and apply the type of knowledge he had acquired himself.
Posted by Matt at 16:36