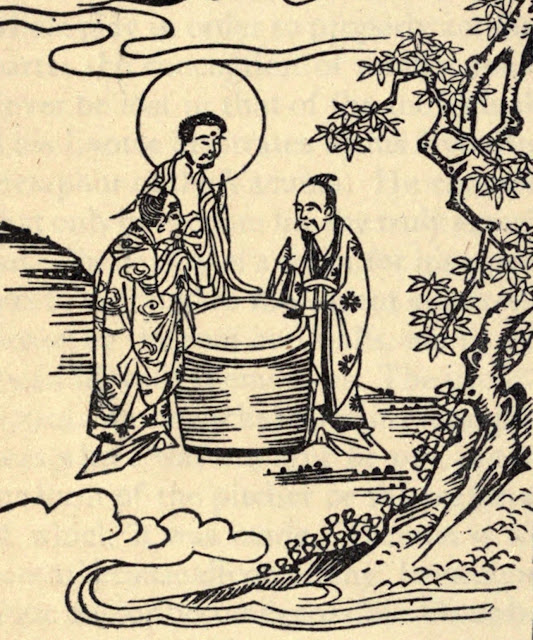 An illustration of the Sung dynasty Chinese allegory of the The Vinegar Tasters by Tachibana Morikuni (1679-1748). The image depicts the sages who created the Three Teachings of China; the Buddha, Confucius and Lao-Tze, standing before a vat of vinegar. Each sage dips in their finger and tastes the liquid. Confucius finds it sour. The Buddha finds it bitter. Lao-Tze finds it sweet.


This essay was written in English by the Japanese writer and scholar Okakuro Kakuzō (1863-1913). It was originally published in 1906 and has remained in print since. The book not only celebrates tea, but also its role in the culture and aesthetics of Japanese life. Some people believe that tea is a matter of life and death. The author of this volume thought it was much, much more important than that. The sub-title tells you something of this: A Japanese Harmony of Art, Culture and the Simple Life.

The book begins with a section called The Cup of Humanity;

Tea began as a medicine and grew into a beverage. In China, in the eighth century, it entered the realm of poetry as one of the polite amusements. The fifteenth century saw Japan enoble it into a religion of aestheticism - Teaism. Teaism is a cult founded on the adoration of the beautiful among the sordid facts of everyday existence. It inculcates purity and harmony, the mystery of mutual charity, the romanticism of the social order. It is essentially a worship of the Imperfect, as it is a tender attempt to accomplish something possible in this impossible thing we know as life.

Okakuro Kakuzō was the son of a rich samurai, Okakura Kan'emon, who had relinquished his rank to become a silk merchant. Kakuzō was educated from an early age in English and when he entered Tokyo Imperial University he studied with the Harvard educated American professor Ernest Fenollosa (1853-1908). Later in life he travelled very widely in China, Europe, India and the US and established his own academy, the Nihon Bijutsuin (Japan Fine Arts Academy) in 1898 with a group of artists and followers. He later became the first curator of the Department of Chinese and Japanese art at the Museum of Fine Arts in Boston.

Tea was first introduced to Japan in the 9th century and by the the 13th century Japanese grown teas were an important high status commodity.  Many of the rituals and concepts involved in the fully developed Japanese Tea ceremony can be traced back to the Buddhist Tea master Sen no Rikyū (1522-1591). Sen sought to bring together the simplest of everyday activities with spiritual and philosophical tenets. One of his famous sayings is;  The Way of Tea is naught but this:  you boil water, then you make the tea and drink it.

Sen no Rikyū brought into the Way of Tea an aesthetic which embraces the idea of imperfection, incompleteness and transience. This approach can be seen in the tiny tea-bowls used in the tea ceremony, which are rustic, imperfect and simply finished. The same aesthetic can be seen in other Japanese arts: Ikebana flower arranging; Zen gardens; Bonsai plants and Haiku poetry.

In 1591, for reasons that are unclear, Sen no Rikyū was ordered to commit ritual suicide by his master Taiko-Hideyoshi.  In this book, Okakuro Kakuzō describes the tea ceremony that Sen holds for his disciples immediately before his death. After Sen served tea to each of his guests, he then gave each of them a piece of the tea ceremony equipment as a souvenir, keeping only the tea bowl, which he broke so it would never be used again. Before his death he spoke a verse to the dagger;

Welcome to thee,
O sword of eternity!
Through Buddha
And through Daruma alike
Thou hast cleft thy way.


The life of Sen no Rikyū is celebrated annually by many schools of the Japanese way of tea.

The volume is HERE.