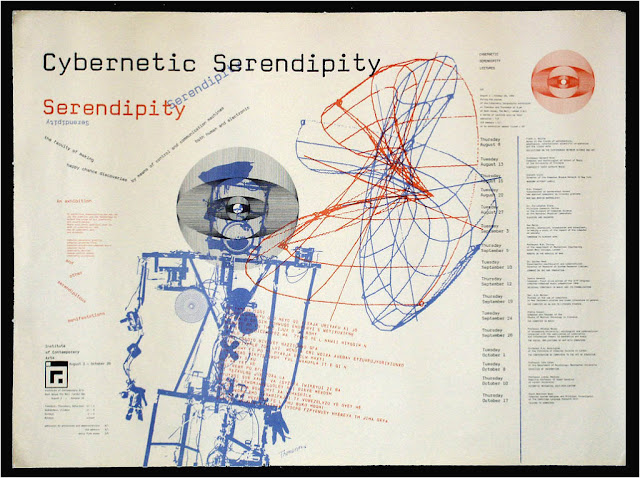 From the press release for the Cybernetic Serendipity exhibition, ICA London, 1968.

Cybernetics - derives from the Greek «kybernetes» meaning «steersman»; our word «governor» comes from the Latin version of the same word. The term cybernetics was first used by Norbert Wiener around 1948. In 1948 his book «Cybernetics» was subtitled «communication and control in animal and machine.» The term today refers to systems of communication and control in complex electronic devices like computers, which have very definite similarities with the processes of communication and control in the human nervous system. A cybernetic device responds to stimulus from outside and in turn affects external environment, like a thermostat which responds to the coldness of a room by switching on the heating and thereby altering the temperature. This process is called feedback.

Exhibits in the show are either produced with a cybernetic device (computer) or are cybernetic devices in themselves. They react to something in the environment, either human or machine, and in response produce either sound, light or movement.

Serendipity – was coined by Horace Walpole in 1754. There was a legend about three princes of Serendipity (old name for Ceylon) who used to travel throughout the world and whatever was their aim or whatever they looked for, they always found something very much better. Walpole used the term serendipity to describe the faculty of making happy chance discoveries. Through the use of cybernetic devices to make graphics, film and poems, as well as other randomising machines which interact with the spectator, many happy discoveries were made. Hence the title of this show.

The New York Times reviewer in 1968 noted that Cybernetic Serendipity, “... is an interim report on investigations in progress”, and that, “The computer is a tool to extend our intelligence.”