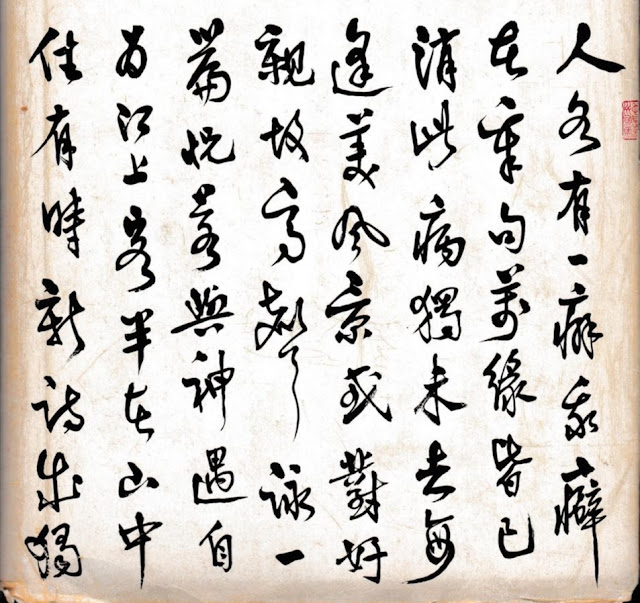 Arthur Waley (1889-1966) was a fascinating English scholar who made a living from translating classical Chinese and Japanese poetry and literature into English, though he couldn't speak modern Chinese or Japanese and never visited the countries (Bio HERE).

In 1970 Ivan Morris pubished Madly singing in the mountains; an appreciation and anthology of Arthur Waley. From Intent of Courtesy, a piece by Carmen Blacker in the book:

The feeling that Arthur’s death had taken us into a world where there moved forces and concatenations bigger than those we encounter in our ordinary existence continued when, a fortnight later, I called at the house in Highgate to see Alison. She took me up to the room where he had died. A great peace filled it and I marveled at such serenity in the place where such pain had been suffered. ‘I have changed nothing,’ she said. ‘But that chair by the window wasn’t green, was it?’ I asked. ‘Oh, that,” she replied. ‘Yes, funny how the creeper has come in.’ I looked again. Through the window left open since he died the creeper had burst in like a lion. It had entirely covered the armchair with a thick coat of green leaves. It had flung tendrils across an entire wall. It had seized the long curtain and twined itself tightly round it in a spiral grip from floor to ceiling. It was as though the world of nature had flung itself into the room, and I thought of the swarms of bees which sometimes alight on the graves of saints or the birds which descend at the funerals of great men. That Arthur should have received this oblation seemed entirely fitting.