The Boat Appeared to be Hanging, As if By Magic... 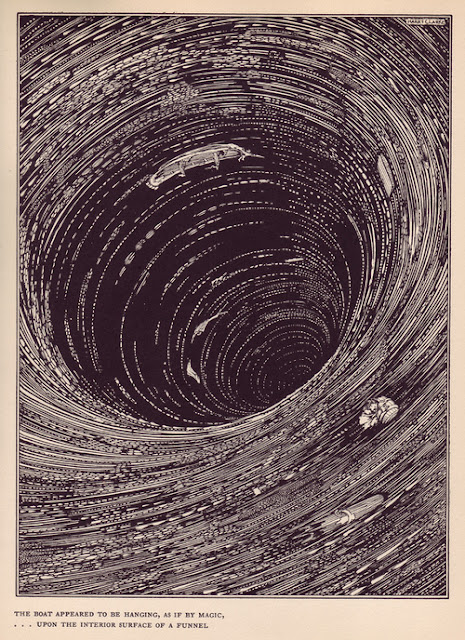 A Descent Into the Malestrom. Tales Of Mystery and Suspense By Edgar Allan Poe.
Illustrated By Harry Clarke 1933


As I felt the sickening sweep of the descent, I had instinctively tightened my hold upon the barrel, and closed my eyes. For some seconds I dared not open them - while I expected instant destruction, and wondered that I was not already in my death-struggles with the water. But moment after moment elapsed. I still lived. The sense of falling had ceased ; and the motion of the vessel seemed much as it had been before, while in the belt of foam, with the exception that she now lay more along. I took courage, and looked once again upon the scene.


Never shall I forget the sensations of awe, horror, and admiration with which I gazed about me. The boat appeared to be hanging, as if by magic, midway down, upon the interior surface of a funnel vast in circumference, prodigious in depth, and whose perfectly smooth sides might have been mistaken for ebony, but for the bewildering rapidity with which they spun around, and for the gleaming and ghastly radiance they shot forth, as the rays of the full moon, from that circular rift amid the clouds which I have already described, streamed in a flood of golden glory along the black walls, and far away down into the inmost recesses of the abyss.