Here is a superb 700+ page treatise on the structure, function and evolution of the eye. The book The Vertebrate Eye and its Adaptive Radiation was written by Gordon Walls and published in 1942. The book is beautifully designed and typeset and includes dozens of very clear and well thought out illustrations.

In his landmark book, Walls (1942) provided remarkable insights about all aspects of the vertebrate eye. This 785-page classic has numerous illustrations, many drawn by Walls, that provide details about the range and variety of evolutionary outcomes to be found in vertebrate eyes. Indeed, the variety of eyes is astonishing, reflecting the staggering range of adaptations produced by selective
pressures for vision in different habitats. 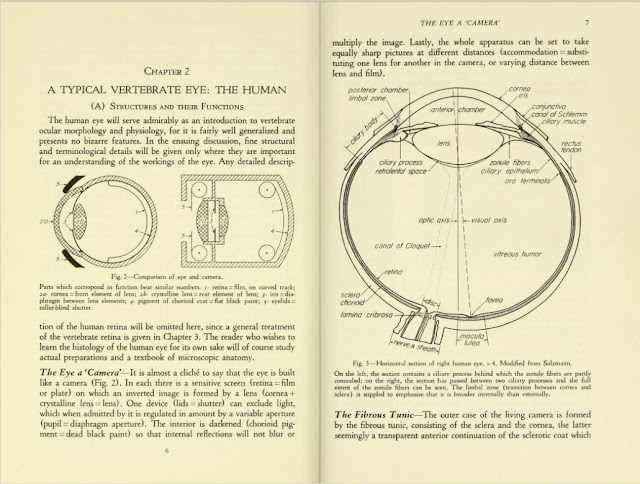 Gordon Walls was something of a renaissance man of 20th century vision science. Initially trained as an engineer, he took a masters degree in zoology, was an accomplished histologist and illustrator and taught visual physiology at Berkeley. Quite early in his career he wrote The Vertebrate Eye and its Adaptive Radiation. It is still the most comprehensive review of comparative anatomy of the eye.
The following obituary of Gordon Walls was written at the University of California:
1963, University of California: In Memoriam
Gordon Lynn Walls, Optometry; Physiology: Berkeley
1905-1962
Professor of Physiological Optics and Optometry