I arrived at Intense Seeing via a particular and contingent route; from quantitative microscopy. This routing both colours my view and provides me with a chance to describe an analytical insight into the whole area. In quantitative microscopy there are a number of issues that have to be tackled to make progress, one of which is the `reducing fraction' problem. It's a really obvious problem; the higher the magnification you are using to resolve the details you are looking at, the lower the fraction of the whole object you can see in any one `field of view' (Unbiased Stereology. Howard & Reed First Edition 1998). 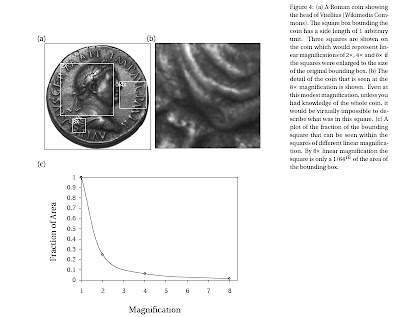 It can be illustrated in a number of ways but the figure shown is a very simple two dimensional example.
Note that however attractive the Eames Powers of Ten film and book it is quite disorienting. Even increasing the linear magnification by factors of 2, after a small number of iterations, leads to a vanishing fraction of the original area. The 8x gives a 1/64 th; keep going another two powers of two and you get to 32x magnification, which is a /1024 th of the original area.
Clearly in three dimensions things are even worse.
Posted by Matt at 09:59