I would recommend that you also read the Wikipedia entry on Pareidolia, which is defined as "a psychological phenomenon involving a vague and random stimulus being mistakenly perceived as recognizable". Its interest in the psychological literature is as the basis of the famous Rorschach inkblot test. It is also the basis of the "Virgin mary on toasted cheese sandwich" and "Jesus christ on an Oyster shell" type of images you can find via Google image search. It was nicely discussed by Michael Shermer in Scientific American May 2005 (http://tinyurl.com/awm2e). My belief is that during evolution the cognitive ability that Pareidolia is based on was of high selective value for early humans (its about seeing patterns in a noisy background). 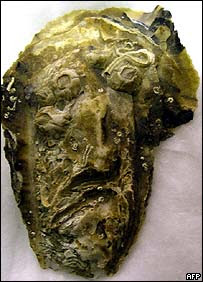 In my own field of quantitative microscopy this phenomena is particularly pervasive and has to be dealt with rigorously and early in training. Researchers are very adept at seeing a particularly microstructural feature at high magnification and then rationalising what they see as being in favour of or against their pet hypothesis. Beware the pretty pictures! Key evidence that a pretty picture is about to be used in a scientific paper includes the phrase; "A typical micrograph is presented in Figure 1". It is almost never a typical micrograph. Really good analytical reasoning for any inference based on microscopic images must (at least) answer the following issues;

(1) What process was used by design to obtain the sample that was imaged. (2) What precautions has the researcher taken to ensure that representative images were used for measurement. (3) How many measurements were taken and has any consideration been given to the number required to establish good evidence of the conclusion. (4) If the image represents a 2D section through the 3D structure has the researcher given a good explanation of how the 2D measurements she has made relate to the 3D structure of interest. (5) What have the image analysis tricks (PhotoShopping) done to the images and evidence within them.

The scientific discipline of drawing high quality evidence based conclusions from microscopy is known as stereology (pretty good Wikipedia entry on it). And as one famous stereologist Prof Luis Cruz-Orive once put it "Quantifying is a committing task" (Toward a more objective biology. Neurobiology of aging Vol 15 pp 377-378).