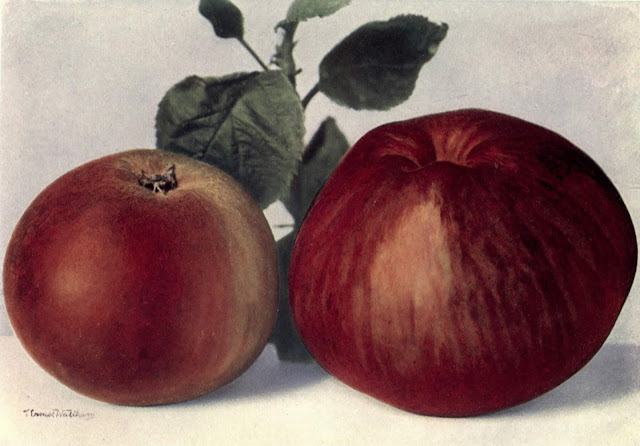 The  American writer Henry Thoreau (1817-1862), once listed the items he thought he would need for an expedition to the Maine woods; pins, needles, thread, matches, soap, old newspapers, cord, a blanket, bread, a spyglass, a tape measure, paper. As the engineer Henry Petroski later pointed out, in his history of the pencil, one of the few things that Thoreau forgot to include in this list was a pencil;

Perhaps the very object with which he may have been drafting his list was too close to him, too familiar a part of his own everyday outfit, too integral a part of his livelihood, too common a thing for him to think to mention.

One object that is even more common than a pencil is an apple. Globally, more than 500 billion apples (about 70 million tonnes) are harvested every year. It is the main fruit crop of the temperate regions of the world.  Apples are part of the large Rosaceae family of flowering herbs, shrubs and trees, which also includes other common fruit crops such pears, plums, cherries, apricots and walnuts. Doctor Robert Hogg, a leading Victorian expert on fruit cultivation and a secretary of the Royal Horticultural Society, pointed out in his book The Apple and its Varieties;

There is no fruit in temperate climates so universally esteemed, and so extensively cultivated, nor is there any which is so closely identified with the social habits of the human species as the apple.

The modern apple has been created by thousands of years of selective cross breeding and cultivation of the ancestral wild apple Malus sieversii.  This species is the only wild species of apple that shares all the qualities of the domesticated apple in terms of fruit and tree morphology. The near universality of apple cultivation is reflected in the thousand's of different apple varieties that are known worldwide;

The most remarkable feature of this richness and diversity is that these are not separate species of apple: they are all varieties of the domesticated apple species, Malus domestica.

It is likely that wild apples originated somewhere in the foothills of the Tien Shan mountains of central asia. At the south-east corner of Kazakstan, close to the borders of Kyrgyzstan and the westernmost provinces of China, is the city of Almaty (sometimes translated as Father of the Apple).  The globe trotting Soviet botanist Nikolai Vavlilov (1887-1943) visited Almaty in the 1920's and saw;

Thickets of wild apples stretch out through an extensive area around the city and along the slopes of the mountain ... here we were in a remarkable centre of origin of apples, where cultivated forms did not rank noticeably above wild ones...

The mixed forests around Almaty, and further into the Tien Shan range, are full of wild apples and pears with an enormous natural diversity of shape, colour, size and taste.

The author of this volume, George Bunyard, was the third generation owner of a famous orchard in Maidstone, Kent that had been founded in 1796. His son, Edward Ashdown Bunyard (1878-1939), came into the family business in 1896 and eventually took over the orchard from George Bunyard. Edward Bunyard became famous as a nurseryman, an epicure, a writer (one book was a celebration of fruit called The Anatomy of Dessert) and, almost inevitably perhaps, a student and critic of apples.