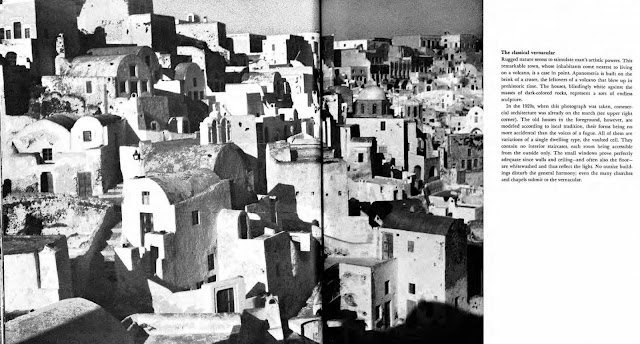 The Armenian-American architect Bernard Rudofsky (1905-1988) trained as an architect at the Technische Hochschule in Vienna between 1922 and 1928. After graduating in 1928 with two master level degrees – one in English, and one in Architecture – Rudofsky then spent 3 years combining practical architectural work in Berlin and Vienna with the preparation of a doctoral thesis.

Rudofsky’s research methods for his thesis reflected two of his lifelong habits - extensive travelling, and intense experiential - observational work. An important part of Rudofsky’s understanding of architecture came from an incessant need he had to travel. From 1923 onwards, Rudofsky spent his summers travelling south from Vienna, visiting Bulgaria, Turkey, Istanbul, Asia Minor, the Black Sea, and Italy. In 1929 he re-visited the Black Sea and Istanbul, and also travelled around Greece. One of the places that he visited that had a profound impact on Rudofsky was the Greek island of Thira (Santorini), and in particular, the traditional architecture of the cliff-top village of Oia (formerly Apanomeria).

‘I learned a great deal by travel... The acquaintance with foreign countries; with foreign towns, dead and alive, early became a habit for me. Every year, at the end of June I would depart for points south, and not return before the last days of October’. [1]

During his visit to Oia in 1929, Rudofsky made multiple water colour and pencil studies, and took multiple black and white photos, of the vernacular buildings in Oia, that seem to pile one on top of another. Rudofsky had an omnivorous approach to observation – it was not just the architecture that was of interest, but also local culture, food, clothing, art, both historical and modern. He made notes, sketches, paintings, took pictures, to create his own collages of what he had seen and heard. His photos from Santorini show the interiors of simple cave dwellings, with elegant barrel vaulted internal ceilings, and local workmen using traditional wooden supports to create distinctive arches.

He submitted, and successfully defended, his doctoral dissertation in 1931 on, A primitive type of concrete construction in the southern Cyclades. The thesis described how the scarcity of timber on Thira, and the ready availability of volcanic pumice stone, had influenced the vernacular architecture. He commented on the pumice construction that: ‘I don’t know of any other building technique that achieves such simplicity as these chambers in terms of the construction, the materials, and the color scheme’.  [2]

In 1964, Rudofsky curated an exhibition called Architecture without Architects at the Museum of Modern Art in New York. He later published a book of the same name. [3] In it he makes the following assertion:

Vernacular architecture does not go through fashion cycles. It is nearly immutable, indeed unimprovable, since it serves its purpose to perfection. As a rule, the origin of indigenous building forms and construction methods is lost in the distant past.

The book was a companion volume to an exhibition that Rudofsky had helped organise at the Museum of Modern Art in New York. Several of the photos in the book came from Rudofsky’s visit to Thera in 1929.

The buildings that Rudofsky documented are superb examples of improvised human artefacts. Rudofsky notes that the untutored builders of the structures he admires: ‘... demonstrate an admirable talent for fitting their buildings into the natural surroundings. ...they welcome the vagaries of climate and the challenge of topgraphy’.

[4] See Bocco Guarneri, A. (2010). ‘Bernard Rudofsky and the Sublimation of the Vernacular’. In Modern Architecture and the Mediterranean. Edited by Jean François Lejeune and Michelangelo Sabatino. Routledge, London.

Image: The village of Oia (formerly Apanomeria) - from Architecure without Archtects by Bernard Rudofsky.